How Do “Lives Matter”? 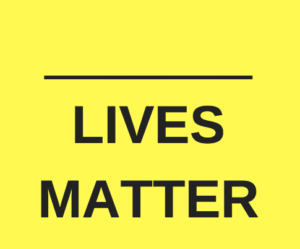 These activist slogans are causing a stir. What is the matter with “lives matter”? How can such affirming statements be so divisive?

Lives Do Matter. But How?

Each slogan claims worth and value for a certain class of people. The dictionary definition of the verb matter is “be of importance; have significance.” The issue is directly related to dynamics of honor, respect, and shame.

Most of the debate focuses on which lives matter. But the sides really disagree on a more fundamental question: What is the fundamental basis of human worth? Why do our lives matter? Because of group honor, or individual dignity?

The “black/all lives matter” controversy is rooted in contrasting assumptions of how lives matter. Here is the difference:

“Black lives matter” reflects the values of an honor culture.

“All lives matter” reflects the values of a dignity culture.

People often view “honor” and “dignity” as synonyms. The two ethical concepts do share similarities (i.e., they are notions of self-worth which govern how people should interact), but they are in fact distinct.

Honor is about the group. Dignity pertains to the individual. Honor is extrinsic and contestable, bestowed by the community. Dignity is intrinsic and unalienable, endowed to every single human.

Honor defines people socially, by their community roles and relational obligations. Dignity identifies humans metaphysically, by their independence from social expectations and norms.

Since the Enlightenment, the basis of human value for Western/Anglo/European cultures has been individual dignity. For example, the U.S. “Declaration of Independence” and United Nations “Declaration of Human Rights” grants human dignity regardless of any human differences.

Anglo culture prioritizes individual dignity over group honor. Defining a person’s identity or worth according to their group feels constraining. In individualistic, dignity-based cultures, a person should break out of group constraints and throw off the mask of social personas to find their ‘true’ self.

The Black Lives Matter movement leverages the moral value of honor to achieve social justice. From this perspective, blacks are not unjustly treated because society fails to acknowledge the inherent dignity of every person. Rather, blacks suffer injustice because the dominant society disrespects and dishonors their particular social/racial group.

Therefore, society must learn to value and honor the entire group of African-Americans. Then interactions with representatives of the group might change. The challenge is not simply to see each person’s humanity (i.e., dignity), but to affirm the legitimacy and worth of the entire group (i.e., honor).

This, I propose, is the cultural assumption and moral logic of the three words “Black Lives Matter.” But some interpret this phrase as a threat.

Non-African-Americans hear “Black lives matter” to mean “Some lives matter more than other lives.” Such a suggestion is anathema in Western liberalism. Hence the counter slogan “All lives matter.” This phrase affirms liberalism’s core assumption of human worth—every single life “matters” because of unalienable dignity.

The contrasting views fuel the spiral of hermeneutical miscues.

Awareness of each side’s cultural and philosophical assumptions should create “hermeneutical humility”—a posture that momentarily refrains from imposing one’s own narrative onto the situation. There is a significant cultural gap between black America and white America. People in the same country do not all share the same culture. The gap makes all of us susceptible to “cultural imperialism”—judging people and current events through the lens of our own values. (And sadly, we are often blind to our own cultural values.)

Better intercultural awareness will not solve all the racial problems in America. Anthropologists have no more power than law enforcement to create social peace.

The honor/dignity classification does not explain all the dynamics of the racial tensions. But hopefully it provides a basic interpretative framework for reconciliation and dampens the bombastic rhetoric and hostility. Take a moment to ask yourself, “Why are they interpreting the news that way?” (Hint: the answer is not, “Because they are ‘domestic terrorists’!” nor “Because they are ‘foreign occupiers’!”) They key is taking initiative to ask, listen, and hear the other perspective. Hopefully we can recognize and affirm the moral basis of the other side, whether it be honor or dignity.

To read how similar cultural differences undergird tensions between the West and Islam, click here. For more about honor vs. dignity, see Peter Berger’s classic essay “On the Obsolescence of the Concept of Honor” (in the book Revisions, 1983). Posts at HonorEthics.org contrast honor and dignity in racial justice and international relations.