HonorShame Posted on May 25, 2022 Posted in Uncategorized 2 Comments

Guest Dr. Te-Li Lau is an Associate Professor of New Testament at TEDS and author of Defending Shame: Its Formative Power in Paul’s Letters (Baker Academic, 2020), from which this post draws. 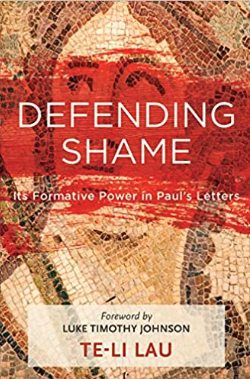 We live in an age where many consider shame to be destructive and harmful. Brené Brown appeared on Oprah Winfrey’s Super Soul Sunday and declared that shame is lethal. In her TED talk “Listening to Shame,” she notes that shame is the gremlin that repeatedly plays two tapes in our mind: “Never good enough” and “Who do you think you are?” She, along with other psychologists, consider shame to be maladaptive and highly correlated to addiction, depression, violence, suicide, and eating disorders. In her book I Thought It Was Just Me, she remarks that “there is nothing positive about shame. In any form, in any context and through any delivery system, shame is destructive. The idea that there are two types, healthy shame and toxic shame, did not bear out in any of my research” (p. 62).

Shame clearly has the potential to push us towards toxic patterns of thought and behavior. After all, we readily witness the destructive impact of shame in social media and in honor killings. Nonetheless, shame need not necessarily be destructive. It can play a positive role. Consequently, it is a mistake to develop resilience to all forms of shame; it is a mistake to eliminate or eviscerate all forms of shame. As a human emotion, shame is a necessary element of who we are; as a moral emotion, shame is a critical component of our moral apparatus. Instead of eviscerating shame, the apostle Paul shows us a better way. He shows us how shame can and should function so as to spur us towards ethical and spiritual maturity.

I’ll briefly draw out one example of how Paul employs shame in 1 Corinthians. In 1 Cor 4:14, Paul states, “I write these things not to shame you, but to admonish you.” Paul’s demurral is surprising, since the preceding passage in 4:13-18 drips with irony and sarcasm. For example, he tells the Corinthians, “We [apostles] are fools for Christ, but you [Corinthians] are so wise in Christ! We are weak, but you are strong! You are honored, we are dishonored!” (4:10). It is clear that Paul’s rhetoric is meant to shame the Corinthians. But if that is so, why does he plainly deny it in 4:14? The best answer is this: the construction “not (οὐ) X, but (ἀλλά) Y” should not be read as a strict antithesis between two polar opposites; rather, the construction should be understood as “not primarily X, but Y.” We see similar uses of this grammatical construction in Mark 9:37; Matt 10:20; John 12:44; and Acts 5:5. Thus, 1 Cor 4:14 should be interpreted as follows: “I write these things not primarily to shame you, but to admonish you.” Paul clearly intends to shame the Corinthians (cf. 1 Cor 6:5; 15:34), but the purpose of his shaming rhetoric is not to humiliate or destroy them. Rather, it is to admonish them so that their minds might be transformed into the mind of Christ (1 Cor 2:16).

Paul shames the Corinthians for their moral failure. They were too enamored with worldly wisdom, wealth, status, knowledge, and eloquence, such that they began to despise members of the church who came from the lower classes (1 Cor 11:22). Moreover, some were engaged in immoral activities that were even considered repulsive in the Roman world (1 Cor 5:1). Paul therefore evokes the painful experience of shame in them so as to rouse them from their moral stupor. He wants them to see their sin for what it is. But shaming rebuke is never meant to be the first instrument of correction. Paul advocates gentle correction first (cf. Gal 6:1). When gentle rebuke is met with arrogance, hubris, and complacency, as is the situation in 1 Corinthians, Paul then escalates the intensity of his correction. He will have no choice but to use the “rod of discipline” (1 Cor 4:21), with much sadness and heaviness of heart. Paul’s shaming rebuke is never done cavalierly without thought of how it would be received, for it is conducted within a family structure that has moral and social obligations towards one another. It is conducted by those who genuinely love the offender. In such a context, the “wounds from a friend can be trusted” (Prov 27:6). Used in this way, Paul’s shaming rebuke is never toxic or destructive; it is redemptive.