Martin Munyao (Th.M., Daystar Academy of Nairobi) was a pastor and theology teacher in Kenya. He is earning his Ph.D. at Concordia Theological Seminary. 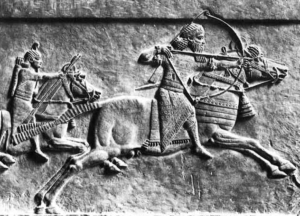 How did God use Israel’s cultural dynamics of honor-shame to reveal himself?

As an example, we take the joint military campaign between Israel and king Jehoshaphat of Judah against Aram in 1 Kings 22:1–28. This story involves multiple honor-shame dynamics, even though hidden in plain sight.

The chapter opens with a blatant and selfish pursuit of honor and glory from the kings of Israel and Judah.

And the king of Israel said to his servants, “Do you know that Ramoth-gilead belongs to us, and we keep quiet and do not take it out of the hand of the king of Syria?” (1 Kings 22:3)

They thought the land was in short supply, a “limited good.” If someone has it, then we don’t; if we get it, then they won’t have it.

Israel and Judah were initially the same people and blood before the kingdom was divided. But in honor-shame cultures, enemies do temporarily come together to find a common enemy.

“Will you go with me to battle at Ramoth-gilead?” And Jehoshaphat said to the king of Israel, “I am as you are, my people as your people, my horses as your horses.”

Even for warring factions within the same larger group do build temporal peace and unity when group/family honor is threatened by an outside enemy. There is a sense of loyalty to the same family name, and blood.

In ancient Mediterranean cultures, the kings played the patron role while all the subjects were clients by default. The prophets were mostly clients even though they were consulted as God’s mouthpiece, so say whatever they thought the patron wanted to hear. Notice the prophets’ response after the kings inquired for the word of the Lord (the Supreme Patron).

“And Zedekiah the son of Chenaanah made for himself horns of iron and said, ‘Thus days the Lord, with these you shall push the Syrians until they are destroyed.’” And all the prophets prophesied so and said, “Go up to Ramoth-gilead and triumph; the Lord will give it into the hand of the king.” (vv. 11–12)

From an HS perspective, this is manipulation of the powerful patrons for favors. King Jehoshaphat seems to understand this dynamic very well for he asks:

“Is there not here another prophet of the Lord of whom we may inquire?” (v. 7b)

For him 400 men to be in agreement on God’s revelation was suspicious enough to warrant for a call out for an alternative voice. That man was Micaiah, who never played in to the man-honoring game over and against God’s honor. Anyway, the king sends for Micaiah, who speaks God’s words (1 Kings 22:14, 17).

Zedekiah felt humiliated by Micaiah’s prophecy that ran contrary to what he and 400 men had prophesied.. Micaiah’s words exposed Zedekiah’s identity as a prophet of God .. Zedekiah lost face, so he struck Micaiah.

In a quick return thrust of words between king Ahab and Micaiah, we see the following progression of conversation:

This kind of conversation communicated honor to the Lord and his prophet, and dishonor to king Ahab and his 400 prophets.

God’s revelation through a lying prophet !?!

Finally, the Lord speaks, but apparently the Lord to sent a lying spirit to the prophets.

Notice that twice in the passage the prophets are referred to as ‘his’ meaning they belonged to the king, and not the Lord’s. But nonetheless a lying spirit was sent forth from the Lord to entice and mislead Ahab to his death trap. Eventually that turns out to be a true revelation of the things to come as far as the battle at Ramoth-gilead is concerned, vv. 29 ff. How do we make sense of that, knowing that it is God’s character not to lie?

Key honor-shame dynamics culturally explain this passage. In honor-shame cultures, the intended meaning is often left unsaid. While truth in honor-shame contexts is a consensus of the majority especially the opinion leaders, God has the ultimate say in the end. Most importantly uses the cultural values of honor-shame to communicate to a disloyal king and his people, calling the loyal to His side.