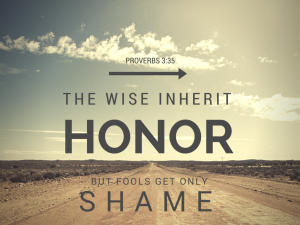 The previous post listed 50 biblical proverbs about honor and shame. The seven categories frame the primary theological themes of Proverbs in relation to honor-shame.

For whatever reason, I assumed Proverbs spoke mostly about shame for the foolish and proud (which, of course, it does). But in Proverbs, the carrot of honor appears larger than the stick of shame. Acquiring honor is a legitimate motivator in biblical ethics. God wants people to have honor (aka, a good name, a crown, praise, etc.).

Let love and faithfulness never leave you…Then you will win favor and a good name in the sight of God and man. (3:3-4)

But of course, there are limits to honor seeking. It is not good to eat much honey, or to seek honor on top of honor. (25:27)

Anthropological literature about honor-shame, typically set in Mediterranean contexts, often organizes societies by gender. This typically leads to a “men=honor; women=shame” binary, wherein women are viewed as the embodiment of shame. Sadly, many biblical scholars import this framework into their analysis of biblical cultures, as seen in this diagram from Bruce Malina’s influential book The NT World. 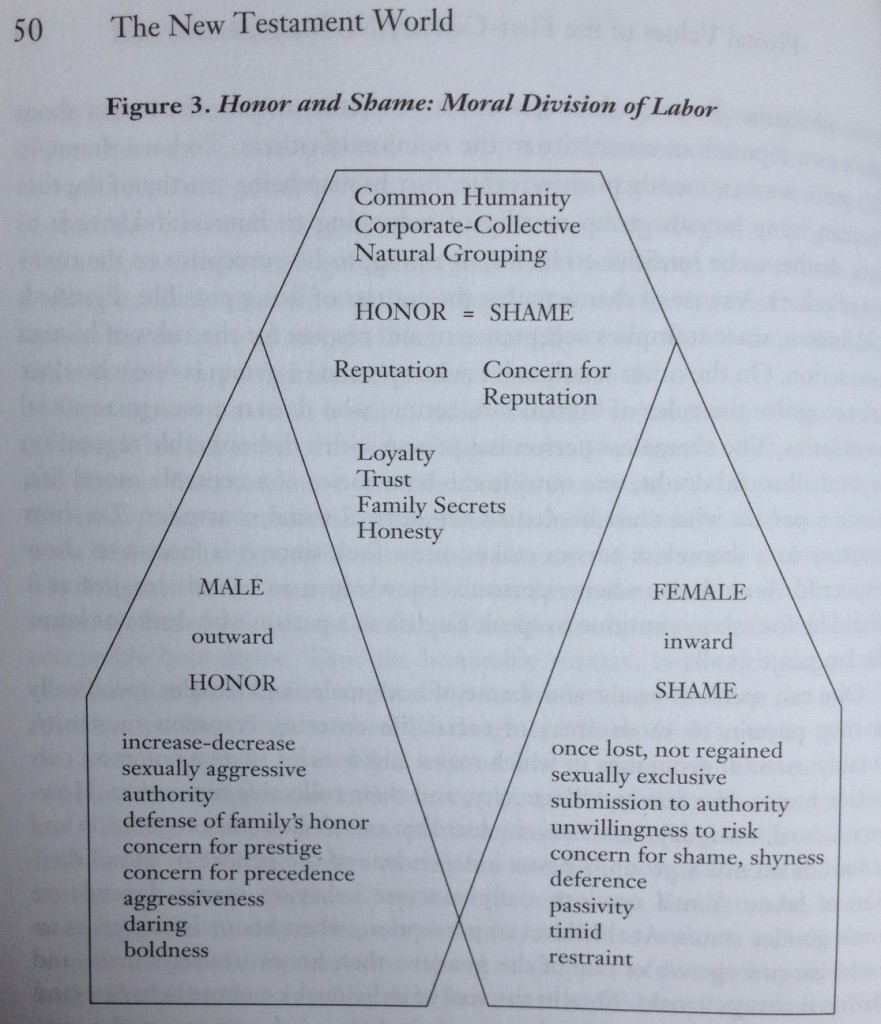 This mentality, whether explicitly stated or just implicitly assumed, leads to unhelpful exegesis and dishonoring relationships. The book of Proverbs reveals a distinctly honorable view of women.

A kindhearted woman gains honor, but ruthless men gain only wealth. (11:6)  Adultery brings shame upon the man (not the woman)–a rather countercultural notion. Blows and disgrace are his (an adulterous man’s) lot, and his shame will never be wiped away. (6:33-34)

Of course, women were not automatically honorable, but by virtue of a noble character (just like all people)—A wife of noble character is her husband’s crown, but a disgraceful wife is like decay in his bones. (12:4)

Ancient Israel was obviously not an egalitarian, Western-style democracy, but divine revelation in that culture esteemed and praised (noble) women for their capable labors in and out of the home (cf. 31:22-31), a fact rarely encountered in anthropological models of honor-shame cultures (whether biblical or contemporary). Also, wisdom is herself characterized as female—“esteem her…embrace her” (3:8-9).

If you know wisdom and follow her, then your life will be taken care of. Wisdom will provide the blessings of wealth, honor, and prosperity. And in return you should respect her and observe her ways. People who are loyally obedient to her words receive life and divine favor (8:35-36). Wisdom is the benefactor of humanity.

Wisdom is not simply an abstract moral code (i.e., the equivalent of Western “law and justice”), but a personified moral agent receiving praise and bestowing honor. Therefore, it is vital to be in right relationship with her, for there are consequences attached (e.g., 13:18).  Some may be skeptical of this third point; questioning whether this is an overextension of the patron-client paradigm. I was too, until reading how ancient Greco-Romans repeatedly spoke high praise to “sophia” (e.g., philosophy, knowledge, wisdom) using the explicit language of benefaction (Reconceptualising Conversion, pp. 100-108). This leads me to at least think that wisdom is like a patron.

And some honorable mentions: