While working in Central Asia, one reality kept frustrating me: people were always leaving. I respected peoples’ tremendous sacrifices to provide financially for their family, but the emigration of so many believers and friends made it hard to gain traction in ministry.  I wondered how to best address mass migration in the Church, but had no answers.

“Diaspora Missiology” attempts to interpret the trends of global migration through God’s missional heart.  If God is moving people according to his plan so that they may find him (Acts 17:26-27), then how can we effectively minister to people outside of their place of origin?  The phrase “Diaspora Missiology” hardly existed 10 years ago, but now much is being said about mass human migration (i.e. urbanization, immigration, and emigration) – an entire IJFM issue and 2014 EMS gatherings, for example. 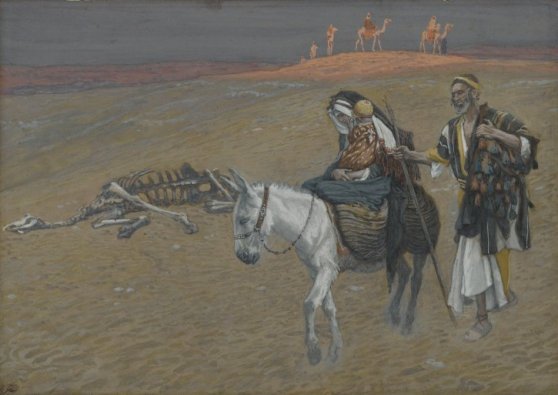 The Flight Into Egypt, James Tissot, circa 1890

1) Most migrants are from honor-shame contexts.

For example, the top countries of origin for international students (China, India, South Korea, and Saudi Arabia) and refugees (Iraq, Burma, and Bhutan) in America all rank as honor-shame cultures.  100 years ago migrants to America were primarily European (and Christian), whereas now they are increasing African, Asian, and Arab.  Honor-shame is the cultural OS for many of the 45 million migrants in America.  And in the case of urbanization people move from rural villages, where community and honor are vital, to urban cities.

War, persecution, starvation, and poverty push people to seek a better physical existence, and also erode people’s dignity.  These unfortunate realities undermine a person’s place in their community; they can no longer “be” in their place of origin, but must relocate to a new social community and re-establish their identity. The disconnection from place and people produces the shame anxiety of “Who is my community now?  Who finds me worthy?”  Unless they are affluent migrants (i.e. businesspeople or international students), I suspect most migrants feel an uneasy sense of shame from their past circumstances.  Christian workers must be attuned to this reality.

For example, urbanization in Central Asia (migration from village to city) has reformulated systems of honor.  Village honor is based more on age and character, whereas urban honor comes from wealth and power.  For a young man, the respect from a flashy SUV eliminates any reliance upon social blessings from village elders.   Globalization (the migration of ideas and goods) generates new expressions and symbols of honor. When capital replaces character as the basis of ‘honor’, it becomes rooted more in fear than genuine respect. The influence of immigration ranges widely.  The decrease of honor-shame forces among Japanese students makes them more receptive to Jesus.  But then living as a migrant in a foreign land can causes people to further utilize honor and shame to maintain ethnic identity (i.e. internet videos of Central Asian men humiliating girls for their ‘shameless’ behavior with Russian men).

The influence of migration upon culture is hard to generalize, but common knowledge says people think differently in different contexts. I wonder, will migration eventually erode communal forces of honor and shame?  As urbanization empties traditional villages and immigration displaces from their family network in the modern world, will global cultures likewise ‘migrate’ from honor & shame to guilt & justice to organize life?

4 Comments on “HS in Diaspora Missiology”