Theologian Dietrich Bonhoeffer (1906-45) speaks about shame in his book Ethics. Bonhoeffer’s unflinching zeal and brilliant mind generated great reflections on the topic of shame, which I’ve summarized in five points below. 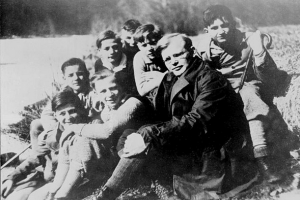 1-Shame is the result of disunion/estrangement

People perceive their disunion from God, and this causes shame. “Shame is man’s ineffaceable recollection of his estrangement from the origin; it is grief from this estrangement, and the powerless longing to return to unity with the origin. … Man is ashamed of the loss of his unity with God and with other men.” (p. 24).

2-Humans respond to shame by covering and concealing

“Covering is necessary because it keeps awake shame, and with it the memory of the disunion with the origin, and also because man, disunited as he is, must now withdraw himself and must live in concealment. Otherwise he would betray himself.” (p. 25) Bonheoffer thought shame was necessary and respectable, not simply as an artificial mask, but as a reminder of our longing to be reunited with our Creator. Because man is disunited, solitude is a more positively intense experience than fellowship, for that is where we experience our true self as estranged/isolated people. Only in prayer with God is our deepest secrecy/privacy rightfully exposed.

3-Shame is overcome by the restoration of fellowship (i.e., re-union)

“Shame can be overcome only when the original unity is restored, when man is once again clothed by God” (p. 27). But to get to this point where shame is overcome, we must endure the act of ultimate shame—making ourselves fully exposed to God. We must bear the shame of publicly confessing our sins to accomplish restoration of fellowship. Bonhoeffer cites Ez 36:32 to support this, “ I will do this… You will have to be ashamed and to blush for shame at your behavior.”

Bonhoeffer was quite skeptical about human conscience (i.e., the internal conviction of wrongdoing). While shame indicates our disunion from God, “conscience is the sign of man’s disunion with himself” (pp. 28-29). Since rules/laws are always defined as either “permitted” or “forbidden” (no positive commandment), Bonhoeffer notes how for the conscience “permitted is identical with good, and conscience does not register the fact, that even in this, man is in a state of disunion with his origin (God). It follows from this also that conscience does not, like shame, embrace the whole of life; it reacts only to certain definite actions.” Human conscience is “concerned not with man’s relation to God and to other men but with man’s relation to himself.”

Conscience pretends to be the voice of God defining morality. Being the new origin of good and evil (in the form of an internal conscience), “man has become judge over God and men, just as he is judge over himself.” This ultimately leads to utter narcissism; man’s life becomes simply understanding himself (not God). “Self-knowledge is now the measure and goal of life.”

Having always heard Western teachers/commentaries positively equate conscience with “God’s law written on hearts,” I found Bonhoeffer’s strong critique of conscience quite interesting. Recall how Bonhoeffer witnessed the Nazi regime gradually hijack the Protestant church in Germany. Watching German Protestants not resist the great atrocities of WWII, Bonhoeffer understandably lost faith in the role of human conscience for guiding Christian morality. I believe Bonhoeffers’s reflections lead us to ask how much Western theology has adopted the idolization of human conscience found in Western philosophy. Have we proof-texted Scripture to “Christianize” Western moral systems? Is our concept of an internal, personal conviction of sin (which is so often the basis of our evangelistic methods) as biblical as we assume? Proverbs 16:2—“All a man’s ways seem innocent to him”—suggests a high degree of duplicity, or corruption, in human conscience (Tit 1:15). Bonhoeffer’s theology opens the door for reflection in this oft-assumed area of theology. Perhaps guilt isn’t as primal and universal as Western Christianity assumes. Bonhoeffer suggests, “Shame is more elemental [ursprunglicher] than remorse.”

In the context of human freedom, Bonhoeffer discusses exploitation and torture (p. 183). In torture, “the body is misused, and therefore dishonoured.” The dishonor of exploitation fuels ongoing sin. “Any physical torture inflicts the most extreme dishonour of the human being. … Bodily dishonour seeks to avenge itself on the body of the infamous tormentor. In this way the violation of man’s bodily freedom once again destroys the foundations of society.” Bonhoeffer comments in this section seem directed at Nazi concentration camps, but brought to mind two disparate events: the crucifixion of Jesus, and the Abu-Ghraib prison scandal. Torture (and other offenses against people) are immoral because the victim “is deprived of the honour which is associated with bodily liberty.” For Bonhoeffer, an act was wrong because it fundamentally dishonored the other.

Bonhoeffer’s notion of shame represents yet another area where he was far ahead of his time. It is generally recognized that shame did not enter Western discourse until after WWII with the work of Ruth Benedict, so Bonhoeffer was reflecting on the nature of human shame well before others. I suspect the circumstances of Bonhoeffer’s life (i.e., resisting/combatting the debasing atrocities of Hitler) afforded him unique insights into the human condition.

Another noteworthy element of Bonhoeffer’s reflection on shame is how it is primarily theological, not just psychological, in nature. Shame ultimately comes from Genesis 3 and disunion with God. Therefore, the solution of shame should come from God. His view on shame is profoundly biblical, and even evangelistic—shame “gives reluctant witness” to our fallen state and disunity. Shame is not temporary social discomfort, but the deep longing of every soul for reunification with God.

If Bonhoeffer’s theology had one shortcoming, it would be the absence of “honor.” He analyzes shame and dishonor with great insight, but never (as far as I read) suggests honor and/or glory as part of the divine remedy for our shame.

7 Comments on “Bonhoeffer’s Theology of Shame”