I distinctly remember a 2006 conversation with a young Central Asian man named Farhad. It completely changed how I understand and share the gospel. After class, we were standing outside having a conversation about God. There was an open door to share the gospel, so I said something like, “You’re sins make you guilty before God, and you will be punished if you don’t receive Jesus’ forgiveness.” Farhad’s eye brows bunched up with a look of sincere confusion, as if I was speaking an entirely different language.

Like most people in Central Asia, Farhad hardly sensed personal guilt, so he did not seek forgiveness from God. Moreover, my use of legal language to explain the gospel (i.e., guilty, punishment, forgiveness) was difficult for Farhad. The courts in Central Asia are notoriously corrupt—verdicts depend much more on who people know than what actually happened. So using legal metaphors to explain the good news to Farhad was unhelpful. That incident forced me to reexamine my gospel witness, especially my metaphors. 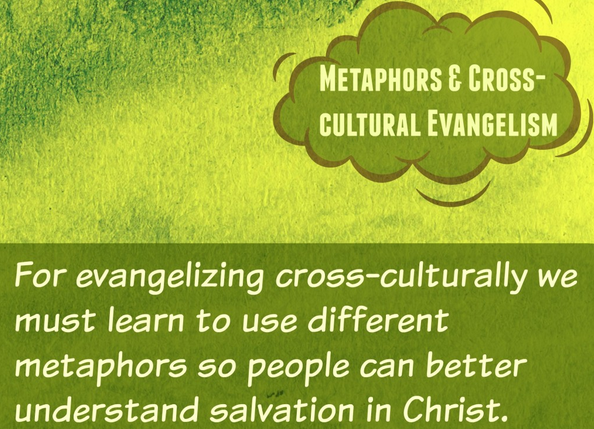 We use metaphors to organize and explain reality. As an example, consider the meaning of these metaphors for people: He’s a rat! She’s an angel! You’re my sunshine! A metaphor borrows knowledge from something concrete to explain something abstract—“time is money,” “life is a journey.” Metaphors are not just for poetry, but for explaining life. Metaphors saturate our theology and evangelism as well. How else could we explain abstract ideas like God or salvation? We use earthly language from our everyday experiences to communicate spiritual realities—“I was lost,” “God is a rock,” “the church is a body.”

Westerners favor judicial metaphors. We use legal language to portray salvation as a big courtroom scene—God is a just judge, we are guilty of violating the Law, Jesus payed our penalty and satisfied justice, we are forgiven of our transgressions and reckoned innocent. Great Christians thinkers like Augustine, Luther, and Calvin were educated as lawyers, so it makes sense they used legal imagery to communicate theological truths. Note how these judicial words commonly appear in Western presentations of the gospel:

But, what happens when we use legal metaphors to share the gospel with someone like Farhad, or someone from a tribal culture where there are no courts? Wouldn’t other biblical metaphors be more appropriate for explaining how we can know God? Culture influences how people hear metaphors. Christian anthropologists identify three types of cultures, each based on people’s primary response to sin.

American culture is mostly guilt-based. Meanwhile, non-Western cultures are generally shame-based and/or fear-based. This means other metaphors, like family or warfare, intuitively make more sense to them.

For evangelizing cross-culturally we must learn to use different metaphors so people can better understand salvation in Christ. As Aristotle said, “The greatest thing by far is to have a command of metaphor.” Fortunately, the Bible is rich in metaphors of family and warfare.  These two articles explain this process in more detail: