HonorShame Posted on May 29, 2014 Posted in NT, Shame, Spirituality, Theology 1 Comment Tagged with Jesus, NT, prodigal son
But just then, the older brother heard the music in the fields and walked into the village to investigate.  The older brother asked a servant about the music, but getting him to explain was like pulling teeth.  “Well sir…well sir… your…your…your brother has returned, and your…your father has killed the fattened calf to celebrate.  He says there is shalom now, everything is right and good!?!?” At that moment, the older brother flew off the handle.  He was so furious; he long expected to discuss how the family would disgrace the younger brother before the whole village to restore the family’s eroded honor.  He longed to vindicate his family’s name, and cleanse the stain his younger brother left.  After the village performed the cut-off ceremony he envisioned gathering his male cousins to kill him.  But now that the father fully restored the younger son, that chance was gone now.  He was livid!    He approached the celebration screaming.  The celebration halted; everyone stood and watched, even the musicians. Silence. 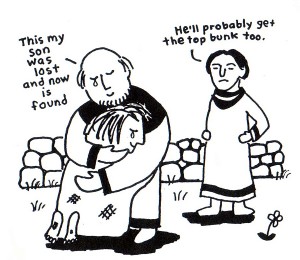 He stood right at the doors of the hall and refused to enter the feast.  He rejected hospitality….from his father…in front of everybody!  Eating is how community and identity is formed; food is the glue that holds people together. Not attending a celebratory feast gravely insults the host.  Again, the entire village watched on as the second son dishonored the father. The Father (should have) said, “No problem.  We’ll celebrate without you.  You weren’t invited anyway!  Servants, lock the doors; dear guests, keep celebrating!”  But no, for the second time, the Father goes out to meet his son.  He walks out towards dishonor to restore and reconcile. “No fair!  I want more.  I never got a goat, and you butchered a steer for him.  That son of yours traded the family fortunes for prostitutes.”  The only thing more shameful than selling land to Gentiles was to sleep with Gentiles, so those words were an insult of the highest degree.  Moreover, they were not stated behind closed walls, but blatantly yelled in public.  The way the older brother disrespected his father by rejecting the feast and yelling was worse than asking for the inheritance prematurely. But again, the father embraced shame.  He stood there patiently, and pleaded, “Son, it has always been yours.  We have to celebrate.  Your brother is alive now…’” And that is how the story begins … This retelling on Luke 15 blends the research of Kenneth Bailey, my own Central Asian experiences, and some imagination to explain the honor-shame dynamics of ‘the gospel within the gospels.’