Purity and Pollution in the Gospels

“Jews in the first century focused on external, ritual purity. Then Jesus came along and erased all the Jewish purity regulations. He emphasized on the internal, moral dimensions of the Law.” Such thinking is the standard Christian interpretation of Jesus’ engagement with ancient Judaism and its purity regulations. But this reading may result from centuries of Christian (polemical) theologizing more than historical exegesis.

In Jesus and the Forces of Death: The Gospels’ Portrayal of Ritual Impurity within First-Century Judaism (Baker, 2020), Matthew Thiessen argues that Jesus was truly concerned with matters of ritual purity and law observance. Modern readers, due to our ignorance of purity concerns, misread Jesus’ miracles and teachings, and so fail to see Jesus’ deep concern for ritual purity. 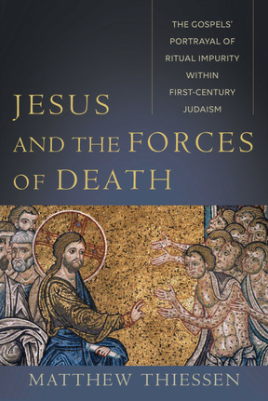 The ideas of purity and pollution are key aspects of honor-shame cultures. But, to be honest, I did not have a solid grasp on how ritual purity “works,” neither in the biblical world nor in modern societies. The concept remains foreign to me as a modern Westerner, so I greatly enjoyed the exegetical and theological insights of Jesus and the Forces of Death.

Chapter 1—Mapping Jesus’s Word—explains the structure of purity regulations in ancient Judaism. The important pairs are holy/profane and pure/impure. People could become impure for many reasons that were not innately sinful. An impure person had to perform the proper ritual ceremony to become purified, and thus be able to enter sacred space (Jerusalem Temple) and perform sacred activities (religious holidays). If an unclean person entered the realm of the holy, this would blaspheme/defame God and be considered a moral sin. Either the Holy would vacate the scene, or the unclean would be destroyed. The law allows for the common (mortal creatures) to relate with the holy (God), and thus is inherently compassionate.

Numbers 5:3 lists the three main types of people deemed impure: “Command the Israelites to put out of the camp everyone who is leprous, or has a discharge, and everyone who is unclean through contact with a corpse” (Num 5:3). These three classes of people embody the forces of death and morality; thus, such persons are not allowed into the presence of the life-giving, holy God of Israel. In Chapters 3–5, Thiessen examines the meaning of Jesus’ interactions with each type of impure person. The chapters discuss OT, ANE, Greco-Roman, and Jewish (2TP, Essene, and Rabbinic) notions of impurity for each type of person. This socio-cultural background—a great strength of the book—effectively situates Jesus’ miracle in a world deeply concerned with purity. We see that Jesus was not obliterating notions of purity but, rather, destroying the sources of impurity themselves so that people could become clean and pure. Jesus sought to removes “forces of death.” He was an overwhelming force of holiness that destroyed the sources of ritual impurities (which implies he cared about Torah’s demarcation lines of purity and impurity).

The final chapters on Sabbath regulations and Dietary Laws argue that Jesus was not seeking to destroy Torah regulations. Rather, Jesus was engaging in common Jewish legal debates about how to properly practice and observe the Law. Other Jews in Jesus’ time, such as the Essenes at Qumran and the rabbis, engaged in the very same conversations to resolve apparent legal contradictions (i.e., if your animal falls in a pit on the Sabbath, … ). Just as Jesus’ miracles made people pure, his teaching instructed people how to be pure before the Law.

Thiessen summarizes his interpretation of Jesus in the (Synoptic) Gospels on page 179:

[R]itual impurity remained of fundamental importance for the Gospel writers, but they were convinced that God had introduced something new into the world to deal with the sources of these impurities: Jesus. By inserting a new, mobile, and powerfully contagious force of holiness into the world in the person of Jesus, Israel’s God has signaled the very coming of the kingdom—a kingdom of holiness and life that throughout the mission of Jesus overwhelms the forces and sources of impurity and death, be they pneumatic, ritual, or moral.

The brevity of the book, though an overall strength, limited the focus to Jesus’ miracles and legal debates. Thus, I wondered how Thiessen might interpret issues of purity in Jesus’ crucifixion, John’s Gospel, and Paul’s mission to the Gentiles. In sum, Jesus and the Forces of Death makes a clear, cogent argument for situating Jesus within, not against, the Judaism of his day. The work of NT scholarship covers much terrain in just 196 pages and offers fresh readings of many familiar Gospel stories. This book broadened and enhanced my understanding of purity in the Gospels, Christian theology, and global cultures.

Disclosure: I received this book for free from Baker to post a review.