HonorShame Posted on October 22, 2020 Posted in Uncategorized No Comments

The academic online publication Missio Dei: A Journal of Missional Theology and Praxis has a recent issue dedicated to honor and shame. Rather than repeating the introductory explanations of honor and shame, the articles apply and explore a rich variety of topics in light of honor-shame realities. The editor Chris Flanders has done an excellent job in curating these 10 articles and 6 book reviews. 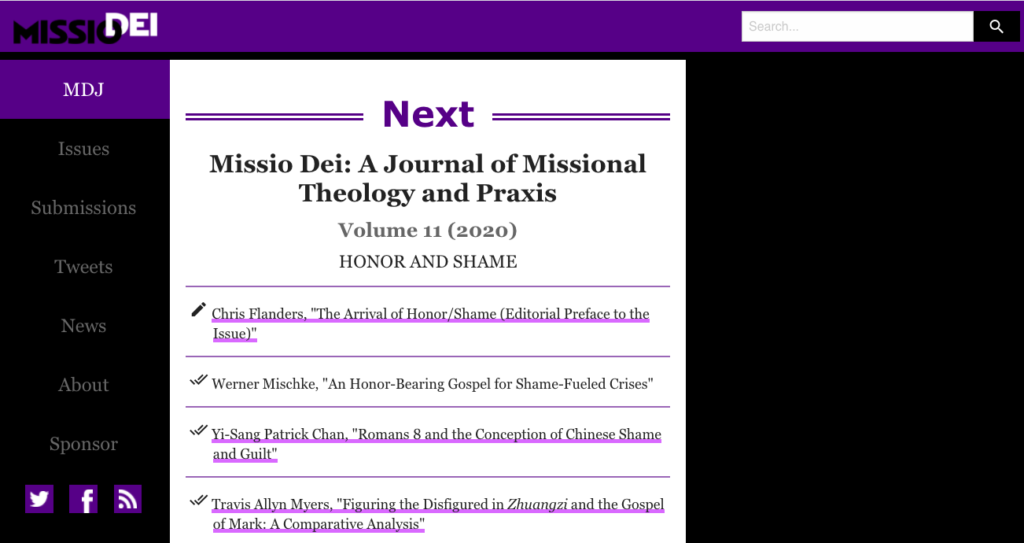 Here is his summary from the editorial preface.

In “An Honor-Bearing Gospel for Shame-Fueled Crises,” Werner Mischke asks what the gospel implies for the current global refugee crisis, issues of terrorism, and the poison of racism. His answer? Shame is at the center of such persistent global crises, and Ephesians 2 provides a gospel of hostility-killing peace and shame-covering honor, which can be resources to heal these enduring problems.

Yi-Sang Patrick Chan provides us with a view of Romans 8 through distinctly non-traditional lenses. “Romans 8 and the Conception of Chinese Shame and Guilt” calls for a different view than the traditional Anglo-European approach with which most of us are familiar.

Travis Myers, in his article “Figuring the Disfigured in Zhuangzi and the Gospel of Mark: A Comparative Analysis,” provides a wonderful example of comparative theology, using stories from the Chinese classics of Zhuangzi and three stories from the Gospel of Mark. In this comparative work, he engages issues of disfigurement (and the accompanying stigma, shame, and need for honor) which raise important questions for Christian communities in every context, especially how to view and treat those on whom society has stigmatized and shamed.

Drawing upon his extensive missionary experience, Alan Howell offers a reading of Paul in the book of Philemon, utilizing a Mozambican rhetorical perspective. His article “‘Old Man’ as Cipher: Humor and Honor-Shame Rhetoric for Reading Philemon in Mozambique” provides a fresh cultural reading of that brief New Testament document.

Once a paragon of church growth and global admiration, the Protestant Church in Korea now struggles with significant membership decline and huge public relations problems. Shin-Ho Choi and Mike Rynkiewich, in “Face and the Loss of Reputation in the Korean Protestant Church,” paint a picture of institutional face-loss as a salient factor in the current challenges Korean Christianity faces.

Jackson Wu’s “From One Honor-Shame Culture to Another: A Proposal for Training Chinese Missionaries to Serve in Muslim Contexts” does the missiological community a favor by directing our attention to one of the “new sending nations,” China. He analyzes two very different cultures that both adhere to decidedly non-Western views of honor and shame. In his analysis, Wu proposes a framework for seeking context-specific strategies and training methodologies.

Anthony J. Gryskiewicz’s “Honor and Shame in Ruth” brings helpful insights from this ancient Mediterranean story to the modern, Western reader, especially in terms of face concerns and facework.

Evertt Huffard holds the special distinction of being the very first Western missiologist to write a PhD dissertation that materially addressed issues of honor/shame from a missiological perspective. He did so in 1985 while at Fuller Theological Seminary, writing on the topic of “Thematic Dissonance in the Muslim-Christian Encounter: A Contextualized Theology of Honor.” We are honored that he has continued this distinguished legacy here with his article titled “How Glory Veiled the Honor of God (2 Cor 2:1–4:6)”, in which he draws upon current research to shed light on a well-known, missiologically significant section of Paul’s writings.

In this issue, veteran missionaries Sherry Faris and Jeremy Davis provide us with real-life case studies in “Honor and Shame among the Sankaran in Guinea: A Case Study.” These two tangible examples of how honor-shame issues show up in very different contexts illustrate both the universality of these issues and the incredible challenge for those who would attempt to navigate honor-shame issues successfully.