“Cultures of honor and shame are violent.” This common assumption is a myth rooted in a pejorative cultural bias. 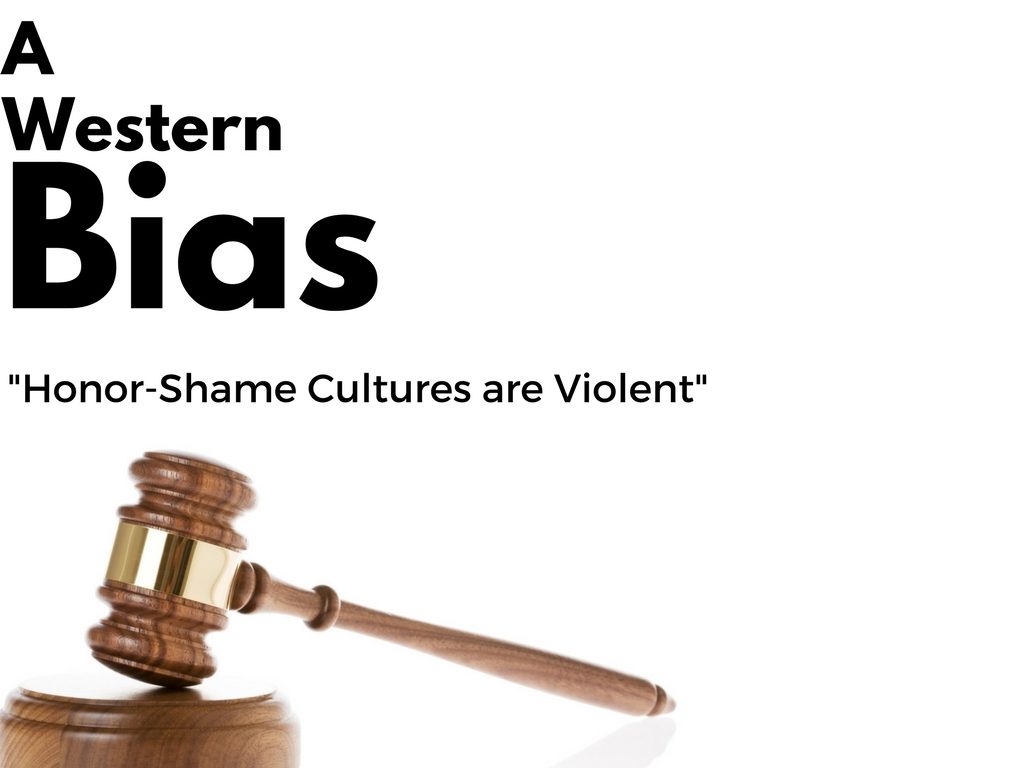 The reductionist definition of honor-shame culture as singularly violent reflects a Western cultural bias. To say “honor-shame cultures are violent” is ridiculous stereotype, akin to saying, “Black people are thugs” or “Muslims are terrorists.”

Yes, violence is an aspect of honor-shame cultures, but violence is not the defining feature of their moral system, as many a Westerner supposes. It is dangerous and unjust to define an entire social group by a few extreme outliers. Remember, violence is present it all cultures. Violence is ultimately rooted in spiritual separation from God, not merely in cultural or psychological dynamics.

Guilt-innocence cultures are arguably as violent as honor-shame cultures. The main difference is that much violence in Western contexts is legalized. Our government legislates “behavior involving physical force intended to hurt—i.e.,violence. Laws often provide a social justification for Western violence. This explains why Westerners can overlook the violence in their own culture, but then label honor-shame cultures as “violent.” Consider these examples of rampant-yet-legalized violence in America.

My point here is not to debate the morality of these issues (though that is certainly an important conversation). I mention these as examples of rampant, legalized, and generally-accepted forms of violence in American culture.

Not to get too cynical, but violence is often highly-industrialized. Corporations reap large profits from the gun, prison, and military industrial complexes, so they have powerful lobbies to influence legislation that perpetuates these forms of violence. This reminds us that government laws are not always synonymous with morality, since corporate interests influence laws.

Nor is my point to romanticize shame-based cultures as hippy communities of love and peace. Shame obviously leads to violence, as depicted in the Old Testament stores of Cain and Saul. Shame and violence are deadly partners, but that does not mean honor-shame cultures should be one-dimensionally defined as violent.

The Main Point: For a Westerner to suggest, “Honor-shame cultures are violent,” is an inaccurate cultural bias that (1) falsely stereotypes majority world cultures based on one misunderstood element and (2) ignores the rampant, legalized violence within our own culture (speaking as a fellow American).

A Ministry Application: A negative bias against honor-shame cultures hinders Christian ministry, as Westerners assume the Christian life cannot expressed within the values of honor-shame, but that Christians must “convert” to an guilt-innocence based moral system. We implicitly assume honor-shame cultures are inferior and degenerate, unworthy vessels of the gospel. But this assumption is like saying: “Black people thugs, so they can’t be Christians” or “Muslims are terrorists, so they can’t follow Jesus.” These statements are obviously false, in both premise and conclusion. But this is the implicit logic often applied to honor-shame cultures in our stereotypes.

The next post offers a better unifying definition of honor-shame cultures: connection.

8 Comments on “A Western Bias: “Honor-Shame Cultures are Violent””