Guest Colin E. Andrews has lived in Central Asia for 10 years and Southeast Asia for 4 years.

Every culture has unwritten rules about what is rude and what is polite.  Conflict in cross-cultural communication happens when two cultures have a seemingly opposing sets of rules. Here are five things that people in honor-shame cultures say and do that are intended to show respect, but are often interpreted as rudeness by Westerners.

1. Beat around the Bush “Tell it like it is!”  “Shoot straight!”  “Cut to the chase!”  In Western cultures, we don’t like small talk.  If someone has something important to say, being direct is expected.  We tend to interpret indirectness as someone being shy, passive-aggressive or even dishonest. 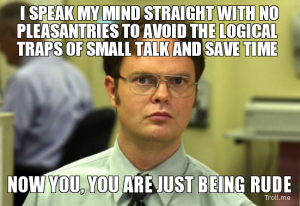 Imagine the following business meeting.  Joe (American businessman) firmly shakes Mr. Kawasaki’s hand and says, “Nice to finally meet you.  Did you have a chance to read through the contract my office sent you?”  Mr. Kawasaki ignores Joe’s question and replies, “Please come in.  Sit down.  Let me pour you some tea.  How is your family?  How do you like Japan so far?” Both people are trying to be polite.  Joe doesn’t want to waste Mr. Kawasaki’s time, so he gets right down to business.  But, getting right down to business is considered overly direct and rude in most honor-shame cultures.  So, Mr. Kawasaki attempts to show his respect for Joe’s long travel to Japan by pouring him some tea and taking time to ask about his family.

2. “How old are you?” Asking someone their age, especially a woman, in Western culture is considered impolite.  However, age is very important in honor-shame cultures. In many languages, there are different pronouns for people, depending on their age. English uses one pronoun to refer to everyone from grandmothers to children, and even our pets: you.  When someone from an honor-shame culture asks you how old you are, they are actually trying to figure out how to address you and talk about you.  They want to be polite, because using the wrong pronoun can result in a loss of face for both parties.

3. “Wow, you’re fat!” This phrase has raised more than a few Western eyebrows; calling someone fat is an insult!  But, believe it or not, when someone from an honor-shame culture calls you fat, they are actually paying you a very high compliment.  Carrying a few extra pounds around the waist is often a sign of wealth and power.  In Central Asia, they frequently refer to someone’s big belly as their “authority,” and the word for “fat” also means “healthy.” So, being fat is a compliment.

4. “How much money do you make?” What!? Isn’t that kind of personal?  Not in honor-shame cultures, where wealth is a sign of status.  The more money you make, the more honor you have.  In fact, just like age, some honor-shame cultures have special language patterns they use when speaking to or about wealthy and powerful people.

In Thailand, there’s an entire set of vocabulary that is only used when speaking about the royal family.  So, when someone from an honor-shame culture asks how much money you make, they are probably not trying to be nosey and invade your privacy.  They may be trying to figure out what your status is compared to their own, so they can properly respect your status.

5. Smile and Giggle at Suffering When my son received a very bad burn on his leg during a motorbike ride in Thailand, he spent a week in a Thai hospital for surgeries to remove dead skin.  My son screamed at the top of his lungs in pain as Thai nurses cleaned his wound.  But, they just giggled. The more he screamed, the more they laughed.  “What the heck is going on here?  How can anyone be so uncaring and rude?” Well, his nurses were actually very upset by seeing such a young child suffer so much.  And, they were very embarrassed (loss of face) by the pain they were causing by changing his dressing.

Westerners tend to blush and apologize when we are embarrassed.  But, in many honor-shame cultures (especially in Southeast Asia), laughing and smiling is the default response to embarrassment or loss of face. Both responses are learned behaviors programmed into us by our cultural upbringing.

CONCLUSION: The next time someone from an honor-shame culture is “acting rudely,” stop and ask yourself a few questions.