Q: What do honor-shame cultures and wine have in common? A: They both have terroir!

Honor and shame cultures always have a unique flavor depending on the context. For example, East Asians response to shame by withdrawing, whereas Middle Easterners will defend their honor aggressively.The values of honor and shame lead to antithetical responses. Codes of honor and shame vary so widely that some scholars insist on using the plural “honors,” implying there is no singular, universally-shared notion of “honor” or “shame.” Here is how I explain it:

Alexis de Tocqueville made a similar observation when visiting America:

What our fathers called the archetype of honor was, in reality, only one of its forms. They gave a generic name to what was only a species. Honor is to be found therefore in democratic centuries as well as in aristocratic times. But it will not be hard to show that in the former it presents a different face. (Democracy in America [1848] 4:152-53)

To illustrate this reality, I broke down the 5 major types of honor/shame: Western, Latin, Islamic, African, and Asian. 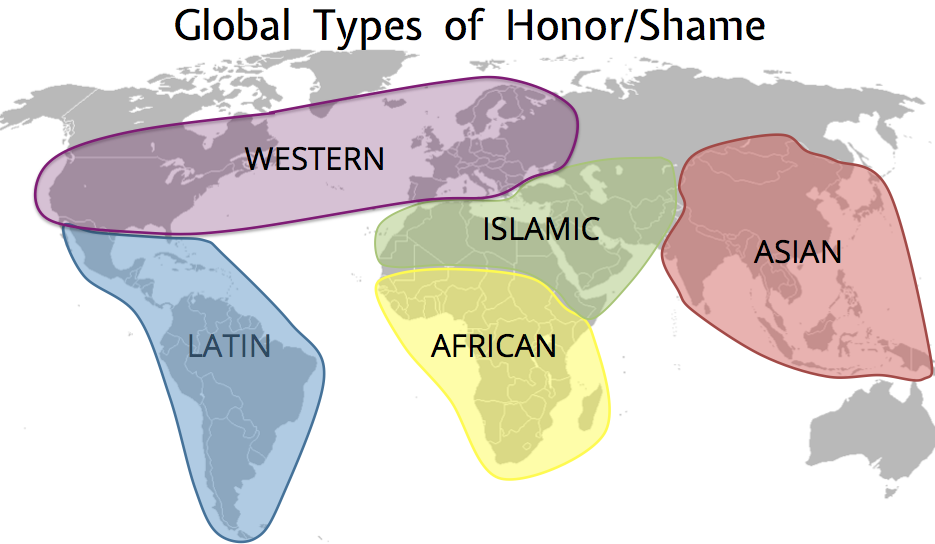 Explanation of the 5 Regions of Honor-Shame

The above comments are obviously broad generalizations. Such simplifications will make some cringe, and rightfully so. I lived in Central Asia for nine years, where the culture is a unique amalgamation of Islamic, Asian, and Soviet notions of honor-shame. Culture types are far more complex than the above map implies.

The point here is simply this: honor-shame has unique flavors; honor-shame is not monolithic. A more accurate depiction would break out the thousands honor-shame flavors, but that becomes too unwieldy to be practically helpful. How would you explain the terroir of honor-shame in your context?

7 Comments on “5 Types of Honor-Shame Cultures”