Here is an honor-shame paraphrase of 1 Peter 2:1–12. This is excerpted from the new book 1 Peter: An Honor-Shame Paraphrase, available as Kindle or PDF for $2.99.

Put away the habits of your shameful past: degrading speech, manipulation, wearing a mask, status envy, and belittling gossip. As new people, grow into your honorable identity. Crave the truth that will sustain you. You know the Lord will always be true to you.1-3

Identify with Jesus, a reliable rock. Though people rejected and humiliated him, God selected and honored him. As his followers, you are “bricks” in God’s new temple. You are esteemed people with special access to God; your sacrificial lives are gifts that bring honor to God through Jesus. This is what God foretold, “I’m building a new temple upon an honored cornerstone, and whoever stands with the cornerstone—Jesus—will never be ashamed.” In fact, those who hope in him receive true honor.4-7a 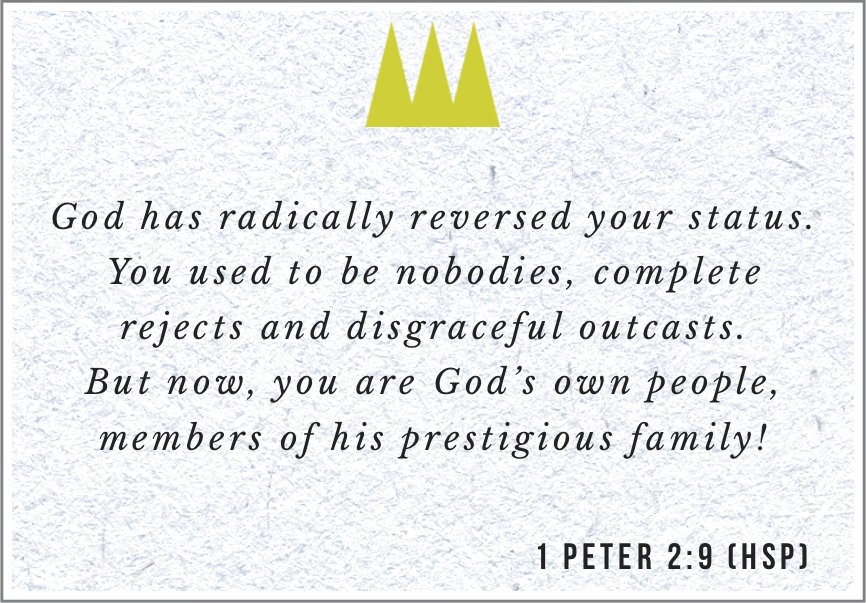 Some withhold their allegiance and reject Jesus as the foundational cornerstone of God’s new work in the world. The scandalous notion of a “crucified Lord” trips them up. They fall because they disregard his words and reject his royal proclamation, as expected.7b-8

But you are a specially chosen group, esteemed royalty with direct access to the king, an honored nation, and the people of God’s very own family! God has honored you beyond all measure so that you can publicly honor him before all people. He has given you eyes to see the truth of his glories. God has radically reversed your status! You used to be nobodies, complete rejects and disgraceful outcasts. But now, you are God’s own people, members of his prestigious family! You used to be completely disconnected from God’s benevolence. But now he has showered lavish favors upon you!9-10

You are cherished and honored by God. So even as outcasts in the minority, you must refrain from the fleshly impulse to establish your own reputation  before others (because that actually demeans your worth before God). Rather, make sure your behavior among the pagans is honorable.  So, even though they scorn you and spoil your reputation, eventually they will see your respectable behavior and honor God when he returns to publicly evaluate all people. Let me explain how you should act as the honorable people of God.11–12