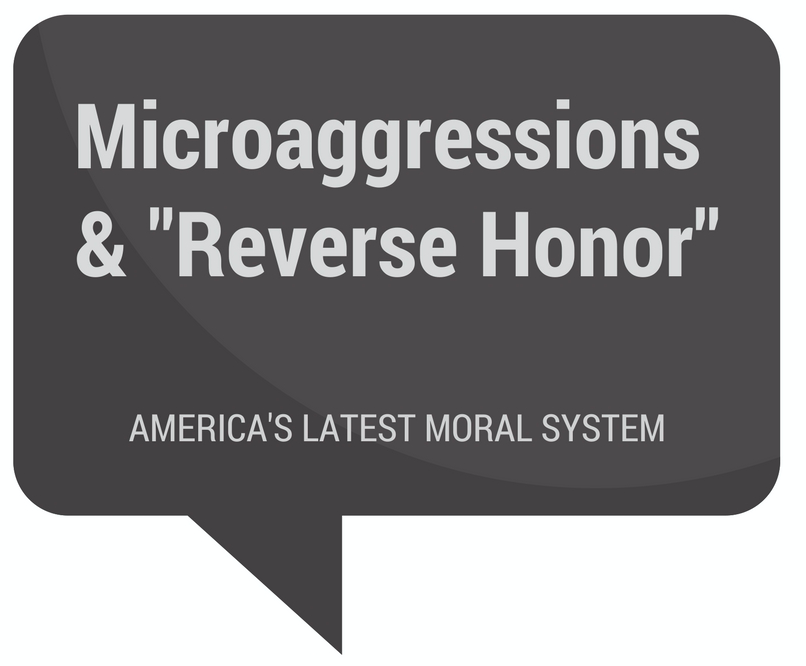 Microaggressions are “brief, everyday exchanges that send denigrating messages to certain individuals because of their group membership.” Microaggressions are indignities that communicate insults. They are unintentional put-downs, an action or word that suggests otherness or abnormality, a reminder that you are different. Microaggressions subtly shame others. Following are some common examples:

You may be thinking, “Seriously! When did those become wrong?” To get a better sense of microagressions, watch this skit: “What kind of Asian are you?”

Microaggressions began as a topic of sociological study in 1973. But within the last few years microaggressions have evolved into “an approach to morality that is relatively new to modern America” (p. 3). Every “moral system” has a way of defining and correcting deviant behavior. Here is how microaggression morality works as a moral system.

Defining deviant: In this new moral culture, “conduct is offensive because it perpetuates or increases the domination of some persons or groups by others.” Any action that promotes inequality or oppresses another cultural group is a microaggression to be publicly condemned. Basically, anything that shames another person is wrong. Shaming others, not transgressing policies or laws, is the new moral basis (see the list of examples above). In this mindset, privilege (the code word for status or honor) risks being a moral deviance because it implies complicity with cultural oppression.

Correcting deviant: The victims of microagressions (often university students) use viral hashtags or websites like Microaggressions.com to openly document offenses against them. They campaign for support in the court of public opinion in order to influence social behavior. The aim is to show that minor actions are part of a larger pattern of injustice and suffering which deserve sympathy.

Here is why I call this new moral system reverse honor. NYU Professor Jonathan Haidt says, “It creates a society of constant and intense moral conflict as people compete for status as victims or as defenders of victims.” Observe the logic of this observation—victims get status; i.e., honor comes from shame. So people emphasize their victimhood because this new moral culture confers social capital upon the most oppressed. This approach creates a race to become the “most shamed” person. Rather than emphasize their authority (i.e., honor) or inner worth (i.e., dignity), the aggrieved emphasize their marginalization and oppression (i.e., shame). The victim has the highest moral status.

In its extreme forms, this moral culture of reverse honor has several ironic features.

These apparent ironies contribute to the confusion and backlash surrounding microaggressions.

The controversy about microaggressions is rooted in cultural differences. In America, the dominant group is usually Caucasian-Americans; they understand morality in legal terms of guilt and innocence. The “victims” of microagressions are generally minority groups (e.g., Asian immigrants, African-Americans) that are more honor-shame oriented.

The minority victims say (in some form or another), “You shamed me!” assuming this is a legitimate basis of morality. Minority victims expect the white aggressors to acknowledge their “shaming” (code words: domination, oppression, exploitation) behavior.

The accused majority respond, “I didn’t do anything wrong!” assuming legal innocence is the basis of morality. But this suggestion of moral culpability frustrates people of the dominant, guilt-innocence culture who respond, “I’m not guilty of anything. I’m a good person. It was an innocent comment.”

Competing cultural values create a social impasse—people are unsure how to act. They do not know whether their action will be praised or condemned. Living in a refugee community, I sense this tension whenever I meet someone. I want to engage and welcome the person, but fear it may be marginalizing to ask, “Where are you from?” Do I risk being a microaggressor who slights others, or should I keep silent?

This tension creates conflict, anxiety, and frustration. And we see this moral confusion playing out in massive ways on university campuses and in national politics.

Is the “Reverse Honor” of Microaggressions Biblical?

A popular sociological article entitled “Microaggressions and Moral Culture” is summarized here and is clarified in this follow-up article. For a critique of microaggression morality, see also, “The Coddling of the American Mind,” The Atlantic (Sept 2015).