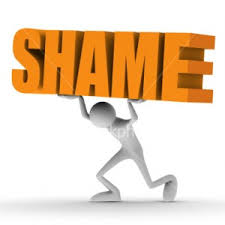 If you Google “shame causes”, the auto-completion suggests ‘violence’, ‘anger’, and ‘depression.’  The reality is shame induces sin.  To address social ills, it may be helpful to address underlying shame.

Here are two well-researched examples of how shame fuels sin. In Central American, poverty and family problems predispose youth to debilitating shame, and then gangs allow a person to discharge that shame via violence and loco behavior.  On the street, criminal violence is a desperate attempt to ward off shame.

In America, the south’s ‘Culture of Honor‘ made violence a more commonly accepted response to insults, affronts, or slights. Because a man’s reputation is historically central to survival, they deter others by projecting toughness through fighting. In Central Asia, I observed the “shame-causes-sin” dynamic in mother/daughter-in-law relationships.  When a new bride moves into her husband family’s house, she because a modern-day slave: forced to work endlessly, publicly humiliated, and blamed for everything – thus inducing obvious shame.  Well this shame festers as that young daughter-in-law ages, raises her own son who brings her brings a new daughter-in-law home , and perpetuates the cycle of shame-induced and shame-inducing sin.

People often ask me, “What is the relationship between sin and shame?”  Shame is a major source of sin, in the form of violence, anger, terrorism, abuse,  oppression, depression, etc..  Even for me, the “shame causes sin” dynamic is  real.  Though I am not criminally violent, I notice anger towards my kids when I feel a sense disrespect from them.  Yes, sin is ultimately rooted in my heart, but feelings of shame unleash sin into my relationships.

He raises the poor from the dust and lifts the needy from the ash heap; he seats them with princes and makes them inherit a throne of honour. (1 Sam 2:8)

Among the people you ministry among, what sins are fueled by chronic shame? How does God’s salvation address that tap root of shame?