Guilt, Shame, & Fear in the Bible 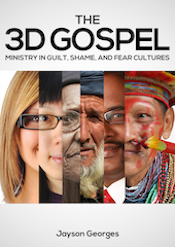 The guilt-shame-fear trichotomy serves as a framework for interpreting Scripture and contextualizing theology, not merely understanding global cultures. Examining Scripture from multiple vantage points can help Christians acquire a fuller understanding of the gospel.In The 3D Gospel: Ministry in Guilt, Shame, and Fear Cultures, I tell the story of biblical salvation (from Genesis to Revelation) through each lens. The excerpted sections below are the paragraphs about Jesus’ death and summons to salvation from of those C2C narratives.

Jesus Christ became the perfect sacrifice to take away the sins of humanity. Jesus lived a perfectly sinless life. Having no sin of His own, He was able to take our sin. Jesus was the perfect Lamb of God. He was pierced for our transgressions and bore the consequence of our iniquities. Jesus’ death on the cross forgives our trespasses and cancels the record of debt that stands against us. Then, Jesus rose from the dead and went to heaven. God forgives those who repent of their sins and believe in Jesus. To become a follower of Jesus, one must recognize and confess the truth of their sin before God, as moved by the conviction of the Holy Spirit. Because Jesus reconciles us to God, our efforts towards moral perfection are in vain. We are saved by faith as a gracious gift from God, not by our own merit. Being forgiven of our sins, we are called to forgive others.

Because Jesus’ ministry threatened the earthly honor of established leaders, they responded by shaming Him, publicly and gruesomely. Jesus was arrested, stripped, mocked, whipped, spat upon, nailed, and hung naked upon a cross before all eyes. He faithfully endured the shame and broke its power. The cross restored God’s honor and removed our shame. Face was restored. God then publicly approved of Jesus’ shame-bearing death by resurrecting him to glory. Jesus now sits at God’s honorable right hand with a name above all others. Jesus’ life faithfully honors God and the human family. Those who give allegiance to Jesus will receive a new status. Their shame is covered and honor restored. People must turn away from the games of social manipulation, status construction, and face management. Membership into God’s family is not based on ethnicity, reputation, or religious purity, but by one’s familial allegiance to the crucified Messiah.

The powers thought killing God’s Son would solidify their authority in the world. Their plan backfired. The death of Jesus Christ was the deathblow to evil forces. The cross disarmed the powers and authorities and publicly triumphed over them. Then in the ultimate display of divine power, God resurrected Jesus. Jesus rose from the dead to a position of power and dominion far above all rule and authority. People must now turn from dark powers and submit to Jesus as Lord. Believers in Jesus are transferred from the kingdom of darkness to the kingdom of light. God raises us up with Christ and seats us with him in the heavenly realms, so that we too have a power and dominion far above all other authorities. With constant access to God’s Spirit, we now stand firm against Satan. Though Satan continues as a lion on the prowl, Jesus shields us from his evil influence as we affirm our identity and authority in God’s anointed Son. God blesses Christians with every spiritual blessing in the heavenly realm, rendering black magic and occult practices spiritually futile. As Christians walk by God’s Spirit in faith and love, we conquer the enemy and strip off enslaving sin.

Which version sounds the most familiar to you? Which one do you think would resonate most with the people you work among?