Sam Louie (M.A., Clinical Psychology) is a therapist and speaker near Seattle, WA. He published Asian Shame and Addiction and Asian Honor, and blogs at Psychology Today.

1- Conditional Love: Many Asian-Americans, including Christians, develop a distorted image of self and God due to the cultural emphasis on higher education, career, relationships, etc. Their ability to love themselves unconditionally is compromised. They suffer from low self-esteem and struggle with the “good enough” complex (i.e. “Am I good enough?”)

2-Shame of Dishonoring the Family: Simply sharing the realities of one’s upbringing can feel dishonoring and shaming to the family. So, many Asian-American clients early in therapy will simply state, “My parents did the best they could,” without honestly confronting the grief of neglect. This is a significant hindrance in therapy; the inability to be “real” with one’s emotions leave many without the skills of emotional intimacy.

4-Repentance Requires Acknowledgment: Repentance in the Christian community requires acknowledgment of one’s sins. But in an Asian church where culture may supercede Christ, the acknowledgment of one’s depravity and fallenness may not get addressed. For example, the need for financial security may make it difficult for Asian-Americans to tithe. A client may tithe and feel he/she’s trusting God only to realize later this is an area that conflicts with the family message to save money.

5-Shame Isn’t Guilt: When clients experience shame they may think they’re experiencing healthy guilt or repentance. This illegitimate shame breeds shame, and does nothing to draw one closer to God. It is about self-punishment and looking inward. A healthier approach focuses on remorse and reconciliation—looking outward to restore relationships vs. feeling like one is undeserving of relationships. But shame-based Asians struggle to accept forgiveness and get stuck in a cycle of judgment.

The 6 Types of Shame

Asian-American clients often believe they are flawed, defective, and inadequate, either in their own eyes or the eyes of those around them. These negative thoughts emanate from these 6 distinct areas. The following quotes are examples from Asia-American clients I have counseled. 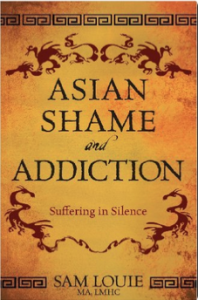 What we can do as individuals, communities, or churches is to exemplify the decision to put Christ above culture. In therapy, I tend to share more about my own life (therapeutic disclosure) then I would with a traditional client. If you are in a position of power (clergy, teacher, etc.), you are considered an authority figure and may garner more respect if you are willing to help shame-based people experience your ability to be emotionally vulnerable. In church settings, there may even be small group opportunities to talk about the process of shame and how it inhibits people from sharing.

In therapy we call this talking about process behind the subject matter. Instead of pressuring people to share uncomfortable aspects about themselves, we might first start off with conversations regarding what it would be like to talk about those topics (i.e. the feelings behind those topics such as feeling judged, shamed, excluded, etc.). This is rich in itself and can often foster more trust and growth than simply feeling forced to share about topics one may not be ready to share.

Finally, going back to the Word and helping Christians realize what elevating Christ above culture looks like by emphasizing how the blood of Christ has paid the price for our shame. It also helps to link shame-based people from similar backgrounds (i.e. dealing with divorce, bankruptcy, sexual addictions, etc.) together so they know they’re not alone.