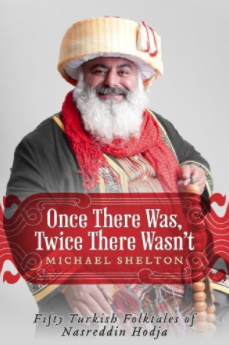 A great way to acquire wisdom for cross-cultural wisdom is to watch the wise. I’m always amazed by Central Asians who handle problems with cultural savvy—they can influence people in such honoring ways. Unfortunately, Westerners often struggle to navigate thorny issues in relationships: How to say “no”? How to give indirect advice? How to response to people who abuse your generosity?

This book Once There Was, Once Twice There Wasn’t includes 50 folktales about Nasreddin Hodja. He is a “wise fool” who talks his way out of a problem in culturally savvy ways. As I read it, I thought to myself, “This is a great resource for learning about honor-shame cultures!” The humorous stories offer insights about relational issues common in collectivistic cultures. The author Michael Shelton kindly allowed me to share the folktale “One is More than Two,” about giving indirect advice.

“One is More than Two”

“The drum sounds sweeter from a distance” ~ Turkish proverb

It has been said that a wise counselor is honored but the wisest counselor is unnoticed. And so it was when the clever Nasreddin Hodja managed to cloak his advice in such a way as to preserve the domestic happiness of his friend Mehmet.

The sharp-eyed Hodja was the first to notice when the thrifty Mehmet began spending long afternoons at the bazaar instead of at home in his fields. “Wherever the leaf flutters, there is wind,” he reasoned, “There must be a reason behind this new habit.” And it wasn’t long before Hodja discovered that reason in the looks that he saw passing between Mehmet and the young daughter of a certain merchant.

Now Allah had already blessed Mehmet with a lovely and virtuous wife to which he owed much of his happiness. But Mehmet was the sort of man who looks at his neighbor’s scrawny chicken and sees a plump duck and was thus never quite content with his own. Although he was well able to support a second wife, Nasreddin Hodja felt certain that his friend had not reckoned with the true cost of such an acquisition.

Hodja knew that Mehmet was a proud man unlikely to be turned aside by direct advice but he also knew that pride can be put to many uses. And so it was that Nasreddin Hodja invited Mehmet to join him for tea one day at a crowded café.

After they had chatted together over hot glasses of chay for some time, Hodja leaned back in his chair and said “How pleasant it is to enjoy the company of a friend! Even so I would not ruin a man’s home to get it as Ahmet did.”

“What on earth do you mean Hodja?” Mehmet said curiously.

“Surely, you have heard the sad tale of Ahmet and Ali?” Hodja asked in apparent surprise.

Mehmet assured Hodja that he had heard no such story and the other patrons of the café pulled their chairs closer for one of Nasreddin Hodja’s tales was not to be missed. Hodja grinned at his audience, and began:

‘Ahmet and Ali had been childhood friends so when they met in the bazaar one day they had much to say to another. It was then that Ali learned that Ahmet had taken a second wife.

“A second wife is a pleasure that every man should know,” Ahmet bragged. “It is like having a garden on the East and West of your house – when the sun shines too hot one side, you just refresh yourself in the cool shade of the other. It is like having an orchard where something is always ripe for harvest.”

Ali became jealous of his friend’s happy situation. His wife was an attractive and virtuous woman but why, he wondered, should he not be twice as happy with two wives? Soon after, he took a second wife himself. But when he brought her home, all was not as he had expected. Ali’s new wife wanted nothing to do with him, saying “I saw the way you looked at your first wife. It is obvious that she is the one you love. Leave me alone.” Disappointed, Ali returned to his first wife but she likewise bitterly rejected him, saying “Why don’t you go to your new wife, since I am no longer enough for you?” Ali went back and forth between the two in this way until they finally threw him out of the house.

Ashamed to admit his situation to his family or friends, Ali wandered in the cold night and finally decided to take refuge in the local mosque. When he entered the darkened building, he saw a figure he at first took for a beggar curled up on the carpet. But when the man rose he realized it was his friend Ahmet!

“Ahmet! What are you doing here in the middle of the night?” Ali asked in surprise.

Ahmet bowed his head sadly. “I dare not return home. My two wives have made my life so miserable,” he said.

“Why then did you boast to me about the manifold pleasures of a second wife?” Ali demanded angrily.

“Because,” Ahmet admitted sheepishly, “it has been so lonely here at the mosque.”’

When Hodja finished his tale, the men in the café roared with laughter but Mehmet just stared down at his tea and said nothing. Soon after, Mehmet rose to leave and Hodja asked if he would like to meet the following day at the bazaar.

“I do not think I will have business in the bazaar for some time,” Mehmet answered quietly, “But you and your wise stories are always welcome in our happy home my Hodja.”

And Hodja smiled, now certain that it would remain happy.