Guest Werner Mischke did a blog series on some key books in New Testament studies related to allegiance, or “relational loyalty”. This concluding post summarizes and applies the key ideas. Reposted with permission. 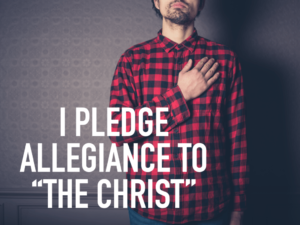 In this post, I want to summarize the main ideas. I will also consider several questions and some possible applications.

In the ancient world, grace and allegiance were understood as a package deal. As a Christian, you received a magnificent gift (Gk., charis) from a great Patron (God). To receive an undeserved gift was deeply counter-cultural. In reciprocity, you return to the Patron praise, obedience, loyalty—allegiance. This reciprocal aspect of grace was in keeping with the culture.

The Greek word pistis in the New Testament can be translated variously depending on the context as faith, belief, faithfulness, loyalty, allegiance. When it is used in relation to Jesus “the Christ,” that is, Jesus the Anointed One, Jesus the Messiah, Jesus the King, then pistis often conveys the meaning of allegiance or loyalty.

Serving in the American military requires an Oath of Enlistment. Servicemen and women “solemnly swear” to “support and defend the Constitution of the United States against all enemies, foreign and domestic;” and to “bear true faith and allegiance to the same; . . .”

Regular attendance, regular serving with your spiritual gifts, and regular financial support (tithing) are expressions of allegiance. People who call themselves “Christian” but are not committed to a local assembly of believers do not show allegiance to Christ.

What if the church’s teaching on the subject of baptism included the early church perspective of an oath of allegiance to Jesus the Christ? In America, I have witnessed many celebratory baptisms. Should the baptism service be less celebratory and more solemn? What might make a baptism service more solemn? Considering the idea of allegiance as an oath, should children make oaths of allegiance? How might this affect our thinking about baptism of children or of infants?

Christ’s glorious Being transforms all secondary identity factors of the believer. If this is true, what are the practical results of one’s ethnicity, tribe, race, or social status being subsumed within one’s allegiance to Christ? How might allegiance to Christ lead you to rethink your social obligations, where you choose to live, or where your family worships?

Because of “the surpassing worth of knowing Christ Jesus my Lord,” Paul identifies all of his social capital (all of his Jewish moral and ethnic honor), whether ascribed or achieved honor, as “rubbish” (Phil 3:3–8). His experiential knowledge of Christ gives him the honor surplus that fuels his allegiance to Christ even unto suffering: “that I may know him and the power of his resurrection, and may share his sufferings, becoming like him in his death, that by any means possible I may attain the resurrection from the dead” (Phil 3:10–11).

Paul’s allegiance to Christ is integral to his participation with Christ. This glory of being in Christ relativizes all other aspects of his identity. How do believers get to the place in their journey where they share in the experience of  “the surpassing worth of knowing Christ Jesus my Lord?” Should the suffering of believers be emphasized as normal rather than exceptional? Should everyone who pledges allegiance to the Christ expect to suffer?

If allegiance to Jesus the Christ is:

then it follows: Allegiance to Christ should be regularly proclaimed, taught, and modeled as a normal part of the Christian life.

Join 5,323 other subscribers
You can unsubscribe at any time.
Thanks for subscribing!