What does honor & shame look like in Haiti? Although Haitian society is strongly hierarchical, on the street Haitian men laud one another with honorific titles, such as “Patron,” “Papa,” “My chief,” and even “My dear one.” Also, when someone makes a good decision or speaks tactfully, others around him will verbally congratulate him for it. When a polite Haitian approaches a house to see if anyone is home, he or she will call out “Honor?” The person inside will then reply, “Respect!”

The public school buses in Haiti are marked with the words “DIGNITY,” and education is definitely seen as the path to elevating your status. Although shame and humiliation are commonly used in child-rearing and in education, outside of those spheres they are not appreciated and rarely tolerated. 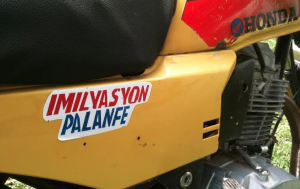 However, one humorous vignette you sometimes see on vehicles is “Imiliyasyon pa lanfè” meaning “Humiliation isn’t Hell.” It’s a reminder that there are indeed worse things than being humiliated.

What words communicate honor and shame? “Respe” means respect and this is the most valued virtue in Haiti. “Wont” means shame, and nobody wants that! “Saj” literally means wise, but to call a person “saj” means he or she knows how to talk with others in a way that makes them feel valued.

Based on TheCultutreTest.com, what is the cultural orientation of Haitians? 42% guilt/ 37% shame/ 21% fear I had my Bible college students take The Culture Test in Creole. To my surprise, “guilt” was the top sensitivity for all of them. I thought this is because they’ve studied theology! However, I assigned my students conduct The Culture Test surveys in Creole, and again “guilt” was the primary sensitivity, regardless of demographic. Note: the 367 people taking the survey were all from Cayes (the most evangelized region in the country) and were disproportionately Protestant. Here are the results:

Although Haitians have a proverb “The Constitution is paper, the bayonet is iron” (a sentiment strongly attested in their history), Haitians do have a very strong sense of “principle” and “protocol.” These aren’t enshrined in legal documents, but if something is a principle, you’d have to be a vagabond to disregard it. This trait in the Haitian conscience clearly came out in The Culture Test.

An honor-shame story? A missionary colleague unintentionally conveyed to a young Haitian believer that he didn’t trust him. When I saw this young man he looked sick, like he had typhoid. I asked him what’s wrong and he explained the situation to me. He told me, “I can go three days without food, but without respect I cannot live.” I offered to pray for him and in my prayer I thanked God that Jesus bore our shame on the cross, lifted us from being nothing and made us His beloved children through Christ. The same young man opened his eyes and widely grinned. His face was radiant with God’s love that had elevated him to a place of honor and that overcame the disrespect he felt from an esteemed foreigner.

How have you addressed honor and shame in your ministry? So far, I haven’t seen HS dynamics in the gospel message to be very useful in evangelism in Haiti. Effective evangelism focuses on the guilt and fear aspects of the message. The HS dynamics are seen in how one talks to an unconverted person—patiently, respectfully and by expressing the personal advantages of following Jesus, which shows that the evangelist cares about the needs of the person, as opposed to a health-wealth gospel. However, HS awareness pays big dividends in discipleship! In the Haitian social hierarchy everyone is consciously above or below those with whom they interact. To emphasize our adoption through Christ empowers Haitian believers to obey Paul’s admonition in Galatians 5:26, “Let us not become conceited, provoking [superiority complex] and envying [inferiority complex] each other.” Likewise, that Jesus would wash his disciples’ feet, an act of abhorrent humiliation, was because he “knew that the Father had put all things under his power, and that he had come from God and was returning to God” (John 13:3). When a Christian leader knows his esteemed, beloved and elevated position in Christ, this liberates him to humbly serve like Jesus without fear of humiliation.

What one advice would you give to newcomers to Haiti? Haitians are extremely gracious and patient people, but communicating disrespect toward a person will make them very angry or totally depressed. Most Haitians assume that foreigners think they are better than Haitians. So when a missionary expresses value and respect to a Haitian, they take note! Photo credit: Sean Christensen