HonorShame — No Comments ↓
Just as the community surrounded the younger son, the father came out of his house, jumped the hedge, and sprinted through the village, yelling, “My son! My son!”  Everybody watched in shock.  Everybody eyes were on the father now, not the son.  An old man running?  The father’s garment was flying in the wind, so that his rear was exposed, publically.   Respected men move nobly; they let others approach them as a gesture of their status. The father bear hugs his long lost son with pure delight and ecstasy.  He got pig filth all over himself.   The Father absorbed shame with his own body.  The father endured shame to reconcile the shamed.  The son stood paralyzed by his father’s radical love, like a little boy bear-hugged by an enthusiastic grandmother.   He stood in his father’s arms, with the entire village looking on, in shock.  He left the far country with a plan to sweet talk his way into a servant’s job, thinking he could work for 20-30 years to save money and repurchase the land and restore his name.   He knew he was no longer worthy to be the father’s son, or so he thought. 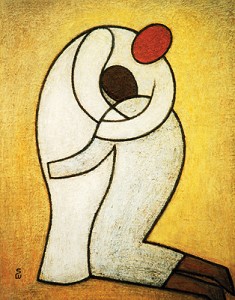 The father stepped back, looked at the boy, then instructed his servants to cover his son’s filth with a robe, signet ring, and sandals.  The father clothed the boy with honor; the shame was covered.  The father acted as if nothing ever happened.  Without saying a word, he restored his son. More significant for communicating a new status than the new clothes was the magnificent feast.  The father butchered a fattened calf and invited the entire village to celebrate with music and dancing all night long.  The clay pot the village was going to use for the cut-off ceremony was used to serve wine to all the guests.  Shame was removed and honor was restored. He found the long lost sheep!  He made his dead son come alive!  All knew the son was now worthy of the family name, the dishonored was honored.  Nothing could be clearer.  The Father absorbed the shame, and restored the family relationship. But just then, the older brother… Click here to read the next posts. This retelling on Luke 15 blends the research of Kenneth Bailey, my own Central Asian experiences, and some imagination to explain the honor-shame dynamics of ‘the gospel within the gospels.’