The 7 Habits of Highly Effective Shaming 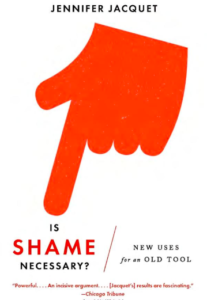 Shaming people can be a powerful tool for changing behavior and establishing norms. Jennifer Jacquet (Professor of Environmental Studies at New York University) in Is Shame Necessary?: New Uses for an Old Tool explains how people can shame selectively and effectively.

This post is a summary of her “7 habits of highly effective shaming.” Her suggestions focus on shaming large institutions such as governments and corporations. Keep in mind that these guidelines are not biblical principles per se. These principles do not apply to restorative shaming in personal relationships or small communities. The focus is on institutional shaming for systemic change.

These 7 habits are not a moral justification for shaming. Rather, they are descriptions of how shaming can be an effective tool for changing behavior. In that regard, I find Jacquet’s list (and entire book) an insightful reflection on the positive uses of shame.

2 comments on “The 7 Habits of Highly Effective Shaming”