Did Bathsheba purposefully seek to seduce David when bathing? 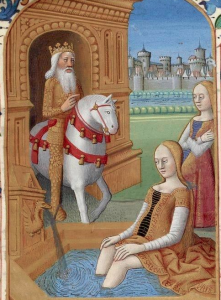 Some books say Bathsheba “intended” to be seen by the king, presumably to seduce David and get closer to the seat of power. But I think this is misreading Scripture. The Bible portrays Bathsheba as an honorable woman of respectable character. Here are three things about Bathsheba we can be fairly certain about in light of the honor-shame cultural dynamics. These are not facts, but reasonable deductions from the social context.

Not being told otherwise, the reader could reasonably assume a Torah-observant teenager from a prominent family would behave as socially expected—with modesty and humility, with a healthy sense of shame. Bathsheba would have hardly been pursuing David. Rather, as a young female she would have been unsure how to resist the King. The significant power distance between David and Bathsheba likely limited her ability to refuse the superior. Considering the social realities in 1 Samuel 11 it is most plausible she was not seeking an extramarital relationship with David. While the text is admittedly silent in that chapter, the next chapter is rather clear on this matter.  When Nathan confronts David, there is zero mention of Bathsheba’s fault. All fingers point squarely at David–“the thing David did displeased the Lord” (2 Sam 11:27). Then the strongest case for her upright character is the rest of the story–the latter biblical testimony where she is repeatedly portrayed as an honorable person.

By the end of this story in 2 Sam 11, Bathsheba has endured 3 significant loses within one year; she lost her body, her husband, and her firstborn son. Those are significant for any person, but especially for a young lady in a collectivistic context. She would have been devastated by the grief, as well as the shame of the circumstances. Nevertheless, God sovereignly redeems her. After this incident with David and Bathsheba, the book of 2 Samuel narrates David’s demise and recounts Bathsheba’s steady exaltation. Many years later as David is dying, Bathsheba acts nobly (at the request of Nathan) to ensure Solomon inherits the throne, as was promised (1 Kings 2:10-12). Then in a later incident, her royal son Solomon “had a throne brought for the king’s mother, and she sat down at his right hand” (1 Kings 2:19). Bathsheba is in a position of power and honor. From a young girl with nothing, she has become the Queen Mother sitting on a throne at the right hand the king, her son. Israel thrives under the leadership of Solomon, who wrote three wisdom books (Proverbs, Ecclesiastes, and the Songs) that shed further light on Bathsheba. Songs mentions his mother fondly: that she crowned him with a wedding crown (Song 3:11), and that she used to teach him (Song 8:2). In Proverbs, Solomon respected the teaching of his mother (Prov. 1:8-9; 6:20; cf. Prov. 31:1ff). The terms mother is used 15 times in Proverbs with the sense that mothers deserve respect and should be spared the dishonor and grief caused by foolish children. While proverbs are general statements, Solomon personally had his own mother in mind when making those positive comments. And while Solomon’s wisdom was clearly supernatural, such wisdom would have been acquired through family, such as his mother Bathsheba. And when combined with a reference in Jesus’ genealogy (Mt 1:6), the Bible portrays Bathsheba as a respectable and honorable woman in these variety of ways.

The prominence and honor of Bathsheba in the rest of the Bible is the clearest indication Bathsheba did not sin against God by pursuing David. This aligns with a prominent literary-theological motif in 1-2 Samuel—“Those who honor me I will honor, and those who despise me shall be treated with contempt” (1 Sam 2:30). Because she honored God, God honors her (unlike David whose status spirals down after this incident because he despised God).

Special thanks to Marg Mowczko for her insightful post “A Sympathetic Look at Bathsheba.”

14 comments on “Did Bathsheba Seduce David?”