This paraphrase of Ruth 1 is from the new book Ruth: An Honor-Shame Paraphrase.

A long time ago before the days of king David, a man named Elimelech lived in his ancestral village of Bethlehem. There was a famine in the land of Judah, so Elimelech and his wife Naomi with their two sons left their homeland and went to the foreign country of Moab.1–2

After they arrived in Moab, Elimelech died and Naomi became a widow. Her two sons eventually married Moabite wives named Orpah and Ruth. Then ten years later, tragedy struck again—Naomi’s two sons died. Naomi became a childless, destitute widow in a foreign land. With no children and no land, she had no status, no community, and no hope.3–5

Years later, Naomi heard that God remembered his people in Bethlehem and provided food for them. So despite her old age, Naomi decided to return to her ancestral village. She gathered everything to return back home.6–7

Naomi told her two young daughters-in-law (also childless widows), “Go home and live with your parents. Thanks for being so kind to me. May Yahweh bless you with the safety and security of a new husband and better family.” Naomi tried to kiss her daughters-in-law farewell. But they began crying and clung to Naomi, saying, “No! We will go with you to your people and to you land! We want to be your family!”8–10

Naomi responded, “No, my girls, that would be foolish! I do not have any other sons for you to marry. And even if I got pregnant tonight, you would have to wait twenty years for that child to grow up before he could marry you. You ladies can’t wait that long. I feel awful that my God Yahweh has taken my sons and left you as young widows. You must return to your parents so they can find you a new family to marry into.”11–13

The three women wept together. Orpah kissed Naomi farewell and returned to her parents. But Ruth remained with her mother-in-law. Naomi told Ruth, “See, your sister-in-law Orpah has returned to her people and to her culture. That is what you should do, too.”14–15

Ruth replied, “Do not advise me to leave you and return home. I will be loyal to you. I will stay with you and support you. Your people will become my people; your God, Yahweh, will be my God; your culture will become my culture. I want to be buried in your ancestral village as your relative. Before our God, Yahweh, I swear by this.” Ruth seemed determined, so Naomi allowed her to come to Bethlehem.16–18

After a long journey, they arrived in Naomi’s ancestral village of Bethlehem. The entire community was shocked. They hardly recognized Naomi after so many years.19

Naomi said to the villagers, “Don’t call me Naomi (which means “pleasant”); call me Mara (which means “resentful”), because I resent what our God, Yahweh, has done toward me. I left Bethlehem with a full family but returned an empty widow. I have lost all status and live as a nobody.20–21

So Naomi settled in Bethlehem, along with her daughter-in-law Ruth, a childless widow from a foreign land. They arrived during harvest season, when the farmers were gathering grain in the fields.22

Learn more about the book Ruth: An Honor-Shame Paraphrase. 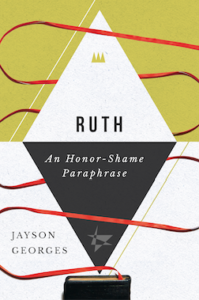