Honor-Shame in Jude and 2 Peter

HonorShame Posted on January 28, 2016 Posted in Bible, Honor, Jesus, NT, Theology No Comments Tagged with bible, NT, theology
Andrew M. Mbuvi (Ph.D., Westminster) is Associate Prof. of Biblical Studies and Hermeneutics at Shaw University Divinity School. His latest book is a commentary on Jude and 2 Peter (NCCS: Cascade, 2015). In this post, he summarizes the honor-shame dynamics of those letters. 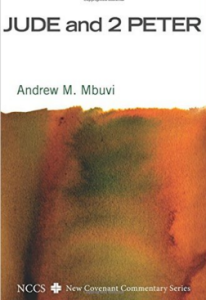 In this commentary on Jude and 2 Peter, I compare the short NT epistles with Greco-Roman associations which were small groups that met regularly for both social and religious purposes. These groups shared meals at these gatherings and acted as social networks for members (Jude 12; 2 Pet 2:13). They valued the group’s honor, which in turn demanded certain ethical responsibilities of its members (2 Pet 1:5-7). Placing the letters of Jude and 2 Peter in the world of Greco-Roman associations highlights the group dynamics reflected in the letters. Those dynamics parallel those that governed Greco-Roman associations with their proclivity to safeguarding each association’s honor within the larger society, especially in times when the Empires grew suspicious of activities of such groups (cf. Letter to Emperor Trajan from Pliny the Younger).

For both Jude and 2 Peter, at stake is not just the community’s honor, but God’s honor!

The language of honor in the two short NT epistles of Jude and 2 Peter reflects Greco-Roman societies’ social infrastructure that valued communal identity. For both Jude and 2 Peter, the community’s honor is at stake. This put the gospel message in danger of being disparaged by the outsiders, because they fail to live up to the ethical principles that are deemed appropriate for early Christian communities. So, Jude incorporates the early Christian self-description as “slaves” of Christ (1:2) knowing that the slave of an important person in the Greco-Roman society had a certain status, by virtue of his or her relationship to the master. For example, Caesar’s slave may have had greater standing than perhaps some poor free persons. Identifying himself as a “slave” of Christ serves to pronounce humility yet, at the same time confers honor on the speaker, since God has glorified Jesus (Jude 24; 2 Pet 2:16-19). In 2 Peter, the author identifies the honor (Greek: timē) that equally binds him to his audience as having originated from the source of all honor, God (2 Pet 2:1-2). That is the foundation of the virtue list that is set for the community (1:5-7). In Greco-Roman social structure honor was a scarce commodity to be guarded even with one’s life. Honor was publicly ascribed and became the prize that members aspired to in Greco-Roman associations. Honor could lift one up the social ladder within the association and outside. This sentiment is reflected in the honor language of 2 Peter 1:1-2, 1:17 and 3:18b. Jesus is able to impute honor to the community because God has glorified Jesus, in spite of his dishonorable death on the cross. Central to the two epistles is the combating of opponents who seem to be propagating a message different from that which the authors and their communities consider the truth. And so 2 Peter identifies his opponents as false-teachers (Greek: pseudodidaskaloi), making the conflict one about public honor. Only the one who speaks the truth can be held as honorable! So for both Jude (v.24) and 2 Peter (1:4-7), at stake is not just the community’s honor, but God’s honor! This is the ultimate basis of the conflicts in these epistles. As a postscript, I must add that Dr. Mbuvi’s two articles about African theology and the book of Job are among the finest theology articles I’ve encountered on the topic of honor and shame.