Ajith Fernando (ThM, Fuller) serves as the teaching director of Youth for Christ in Sri Lanka. This post is from his latest book, Discipling in A Multicultural World (Crossway, 2019), which has a strong focus on practical discipleship in honor-shame oriented cultures. This excerpt from pp. 215-16 is used by permission from the publisher. 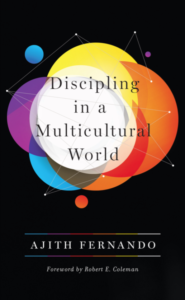 It is very difficult for new believers in most cultures to accept that Christians must not take revenge. When I tell them this after someone has hurt them, some respond that I can follow that principle as a mature Christian, but it is impossible for them. In many cultures, when some- one has dishonored you, it is wrong not to restore your honor or that of your family or friend through revenge. Dishonoring the wrongdoer is seen as the way to restore honor. However much we teach about this, the natural reaction to being hit by another is to hit back. Jesus’s statement “But if anyone slaps you on the right cheek, turn to him the other also” (Matt. 5:39) is considered impossible to practice in today’s world.

Here too the dual emphasis on community and the doctrine of God helps. The community changes its value system by turning the refusal to take revenge into an honorable practice—a high value. We expound this principle often in our teaching and preaching. We show how true healing takes place when there is forgiveness. When teaching what it means to obey God, we will use as illustrations vivid stories of Christians who forgave and refused to retaliate. We present the heroism of honorable forgiveness and the healing it brings. As I have said often in this book, values are changed through constant exposure to the truth.

The doctrine of God gives the logic of why revenge is not necessary. Paul says, “Beloved, never avenge yourselves, but leave it to the wrath of God, for it is written, ‘Vengeance is mine, I will repay, says the Lord’” (Rom. 12:19). The logic of this is that dishonor will indeed come at the final judgment to those who hurt us (unless they repent). God will repay. We show how the doctrine of judgment is an antidote to bitterness. People who have been hurt are angry that wrongdoers have gotten away with it. They haven’t. God will repay.  Later in Romans Paul will say that this repayment of evil is sometimes done by government authorities, to whom God has entrusted the task of rewarding good and punishing evil (Romans 13). If we tried to take revenge, we would make a mess of it. Instead, we do something we can do, something that will help heal us: we activate love in the place of hatred. So Paul goes on to say, “To the contrary, ‘if your enemy is hungry, feed him; if he is thirsty, give him something to drink; for by so doing you will heap burning coals on his head’” (Rom. 12:20). The result of this process, says Paul, is honor for us, for we have won a victory: “Do not be overcome by evil, but overcome evil with good” (Rom. 12:21). The logic is based on the doctrine of God, but the language uses honor-shame criteria. …

We must labor to help our people to have this transformed mind— with its new sense of values that looks at truthfulness and the refusal to take revenge as honorable things.