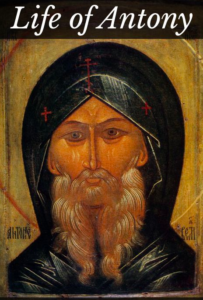 Life of St. Antony, written by Athanasius in 360 AD, is one of the most important books in Christian history. The hagiography recounts the spiritual journey of the famous “Father of Christian Monasticism.” Antony was an uneducated orphan who lived in monastic solitude and defeated Satan in the deserts of Egypt.

The short biography of Life of St. Antony not only pioneered the genre of hagiography (an idealized biography of a saint), but also helped spread the monastic ideal throughout the Church.

Antony (251–356 AD) lived at a pivotal junction in history, a time when Christianity transitioned from being a persecuted minority to the favored religion in the Roman Empire. For this reason, his life and teaching was crucial in redefining the classical, Greco-Roman notions the “good life.” Wisdom and goodness were no longer bestowed by philosophers or imperial leaders, but through a spiritual experience in the form of monastic self-renunciation. Life of St. Antony burnished new Christian conceptions of honor and shame in antiquity. Here are four examples, along with extended quotes, of how this important book re-defined honor and shame in the Christian life.

A prominent theme is how Antony shames and despises the Devil. Antony “passed through the temptation unscathed. All this was a source of shame to his foe [the devil]. For he, deeming himself like God, was now mocked by a young man; and he who boasted himself against flesh and blood was being put to flight by a man in the flesh.” (5, cf. 11)

Antony later cites Ephesians 6:14 and Titus 2:8 in this regard. “He exhorted, ‘Take up the whole armour of God, that ye may be able to withstand in the evil day,’ that the enemy, ‘having no evil thing to say against us, may be ashamed.’” (65).

Here are exhortations from his teaching:

Antony made a common Christian argument against the pagans—Christ and his message are a complete reversal of honor standards. The cross was not a source of shame and mockery, but the exemplar of divine life. “Tell us therefore where your oracles are now? Where are the charms of the Egyptians? Where the delusions of the magicians? When did all these things cease and grow weak except when the Cross of Christ arose? Is It then a fit subject for mockery, and not rather the things brought to nought by it, and convicted of weakness? For this is a marvelous thing, that your religion was never persecuted, but even was honoured by men in every city, while the followers of Christ are persecuted, and still our side flourishes and multiplies over yours. What is yours, though praised and honoured, perishes, while the faith and teaching of Christ, though mocked by you and often persecuted by kings, has filled the world. For when has the knowledge of God so shone forth? or when has self-control and the excellence of virginity appeared as now? or when has death been so despised except when the Cross of Christ has appeared? And this no one doubts when he sees the martyr despising death for the sake of Christ, when he sees for Christ’s sake the virgins of the Church keeping themselves pure and undefiled.” (79)

Antony lists the false pagan gods, then explains the misplaced honor of paganism. “You do not worship God Himself, but serve the creature rather than God who created all things. For if because creation is beautiful you composed such legends, still it was fitting that you should stop short at admiration and not make gods of the things created; so that you should not give the honour of the Creator to that which is created. Since, if you do, it is time for you to divert the honour of the master builder to the house built by him; and of the general to the soldier. What then can you reply to these things, that we may know whether the Cross hath anything worthy of mockery?” (76)

Antony practiced an extreme form of self-denunciation, even to the point of experience shame for meeting everyday physical needs. Though Christians today would not denounce such daily activities as unholy, it is interesting to note that shame was the emotion of Antony’s conviction. “And he used to eat and sleep, and go about all other bodily necessities with shame when he thought of the spiritual faculties of the soul. So often, when about to eat with any other hermits, recollecting the spiritual food, he begged to be excused, and departed far off from them, deeming it a matter for shame if he should be seen eating by others. He used, however, when by himself, to eat through bodily necessity, but often also with the brethren; covered with shame on these occasions, yet speaking boldly words of help. And he used to say that it behooved a man to give all his time to his soul rather than his body.” (45)

Antony proposed we leverage the positive aspects of shame in our fight against sin. “And as a safeguard against sin let the following be observed. Let us each one note and write down our actions and the impulses of our soul as though we were going to relate them to each other. And be assured that if we should be utterly ashamed to have them known, we shall abstain from sin and harbor no base thoughts in our mind. …if we record our thoughts as though about to tell them to one another, we shall the more easily keep ourselves free from vile thoughts through shame lest they should be known. Wherefore let that which is written be to us in place of the eyes of our fellow hermits, that blushing as much to write as if we had been caught, we may never think of what is unseemly. Thus fashioning ourselves we shall be able to keep the body in subjection, to please the Lord, and to trample on the devices of the enemy.” (55)

Antony’s Humility as an Honorable Example

Athanasius speaks of Antony’s humility in submitting to the ecclesiastical authorities. This was significant, for at that time many monks denounced (and even physically attacked) the institutional church for being too comprised. “He was tolerant in disposition and humble in spirit. For though he was such a man, he observed the rule of the Church most rigidly, and was willing that all the clergy should be honoured above himself. For he was not ashamed to bow his head to bishops and presbyters, and if ever a deacon came to him for help he discoursed with him on what was profitable, but gave place to him in prayer, not being ashamed to learn himself.” (67)

Antony had humble character even in childhood. “With his parents he used to attend the Lord’s House, and neither as a child was he idle nor when older did he despise [his parents]; but was both obedient to his father and mother.” (1)

Even in death Antony sought to avoid worldly praise. Adoration of saints was a common practice in early Christianity. Antony suspected his body would become the object of veneration, so wanted to be buried in secret. “The Egyptians are wont to honour with funeral rites, and to wrap in linen cloths at death the bodies of good men, and especially of the holy martyrs; and not to bury them underground, but to place them on couches, and to keep them in their houses, thinking in this to honour the departed.… But he, knowing the custom, and fearing that his body would be treated this way, hastened, and having bidden farewell to the monks in the outer mountain entered the inner mountain, where he was accustomed to abide.” (90–91) Despite Antony’s wishes, his bodily was “miraculously” discovered in the desert, then translated to Alexandria, then Constantinople, then Vienne.