How Jesus Atones For My Shame

“Don’t you know how much I sacrificed for you???” Those words shaped my sense of self, duty, and how others experienced me. Who said that? My parents. Hearing it made me feel mixed. On the one hand, I was grateful for their sacrifices. I certainly benefited. On the other hand, I had my doubts about their motivations being self-sacrifice pure and simple. (If they came to the U.S. for more money, didn’t that benefit them, too?) And it sounded like I was mostly (or only) a burden to them. Then, when I gave my life to Jesus when I was 17, I noticed God saying that too. Or at least I thought He did. Because some Asian-American Christians would say, “Don’t you know how much GOD sacrificed for you?”

The words coursed through a well-worn groove in my heart. They produced a joyless obedience in me. I felt psychologically and spiritually maneuvered into owing an unpayable debt. And just as I quietly doubted the purity of my parents’ motivations, I doubted God’s. He sounded awfully narcissistic. And I felt like even more of a burden. My sense of shame about who I was deepened. A guilt-based person views themselves as generally good (orange circle in left image), with a few bad actions on the side (the red dot). But a shame-based person (on the right) perceives themselves as essentially shameful (large red circle), so works to maintain a façade of goodness (orange layer). This is why the language of “sacrifice” compounded my shame.

THE NON-CHRISTIAN VIEW OF SELF

Then a few years later, when I was asked to preach Romans 6:1-11, I floundered and fumbled. I expected Paul to say, “Shall we sin that grace may abound? By no means! …Don’t you know how much Jesus/God sacrificed for you?” But Paul was not cultivating the gratitude or the debt-obligation motivation.

He did not say, “Jesus died instead of you.” Rather, he said, “Jesus died, and you died with him; he rose, and you rose with him.” Jesus didn’t die instead of me. He died ahead of me. Paul was cultivating a sense of identity–identity in Christ–out of which life flowed. I didn’t know how to preach that text. I was inspired to study Paul’s language of motivation, and found that identity in Christ was central to him. Even though gratitude was a command in itself, he never uses gratitude as a motivation for more obedience. That was liberating. I no longer felt like God saw me as a burden. I knew He treasured me, because He wanted to recover His image in me, clean it off, and shine through me by joining Himself to me by the Spirit.

My motivation began to be one of deep joy. Years later, the final puzzle piece fell into place. I was reading Irenaeus and Athanasius, discovering what the early church believed about atonement. They said that Jesus shared in our diseased human nature so we might share in his healed human nature. His death was not a punishment that he deflected from us. Instead, he died to do what no other human being could do. Jesus utterly condemned and destroyed the sinfulness in human flesh (Rom 8:3). So when Jesus rose, he had a God-soaked, God-drenched new humanity, which was purified from sin and joined perfectly to the Father by the Spirit. 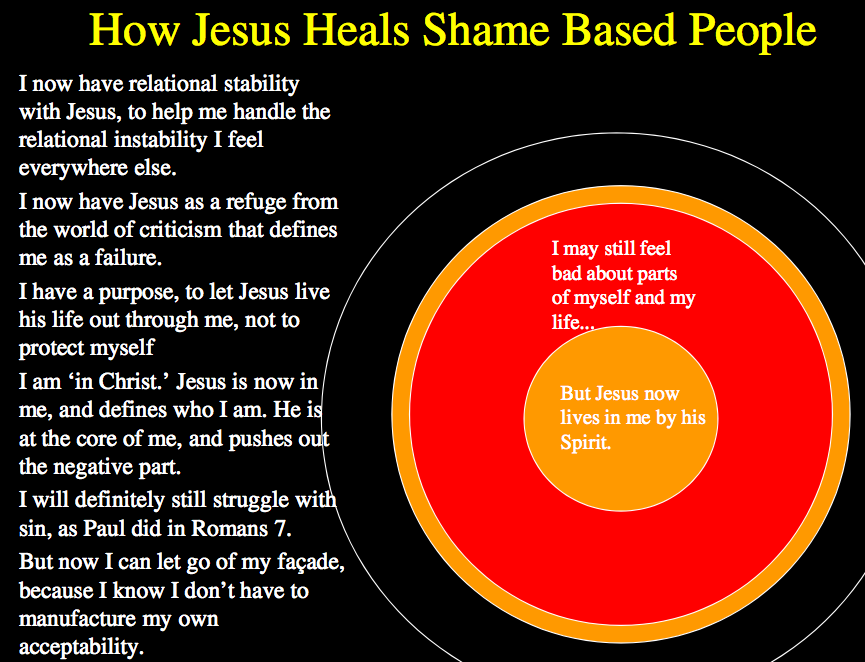 Aha! Jesus was a medical substitute, who acts like a dialysis machine. He takes our impurities. He gives us his purity. That’s why we need to be joined to Jesus by his Spirit. Then I realized God didn’t shame me one bit. He honored me – the true me. In the person of His Son, God accomplished for me what I could not: cleanse myself of all that is wrong and broken. And in the person of His Spirit, God intimately and personally shares with me what He accomplished in Jesus. No sense of burden. No relational distance. No narcissism on God’s part. Instead, I know Jesus died and rose to fix the deepest problem in our human nature, and then join himself intimately to us, by his Spirit. Jesus changes us from the inside out (see diagram above). He shared in our shame, so that we might share in his honor.

6 comments on “How Jesus Atones For My Shame”

1 Pings/Trackbacks for "How Jesus Atones For My Shame"