Sexual abuse creates in people a deep sense of shame and a warped sense of honor. Because the issue is so globally pervasive, I suspect you’ll find this interview informative for ministry. Anthony has lived in a Muslim country for 20+ years. Over the last several years he has researched the pervasiveness of childhood sexual abuse and coordinated a plan for healing its victims.

Jayson: What is the nature of the problem?

Anthony: Childhood sexual abuse is a terrible problem throughout the world and, if we knew the real numbers, most of us would be horrified at our own societies. That said, the reports I’ve read and the personal research I’ve done indicate that the incidence is significantly higher in Muslim societies than in western societies. One friend in a neighboring country told me that if she used a western definition of sexual abuse, then 100% of the society would be victims. This has little or nothing to do with orthodox Islam itself, though there is some correlation.

People everywhere are prone to evil and drawn to sex and power. Shame-based societies make it easier to hide. The need to protect the powerful—the clan leaders and the men in charge—make it important not to accuse the perpetrators, but rather to protect the clan.

What is the solution?

There is no real solution as long as we live in a fallen world. One would love to stop all abuse, but what we can realistically do is to help make the issue known, work to reduce abuse levels, and bring some sort of healing to victims. In our country we have been talking regularly with church leaders and foreign workers about the issues and the causes, particularly the underlying worldview issues. For example, the local construct of “honor” includes the ancient Arabic concept namus–which focuses on power and sex, very different from western understandings of honor.

We have been fortunate that church leaders here have been willing and even eager to discuss these issues, though they’re also happy to see others take them on. Sexual abuse is a community issue, clouded in deep shame. There is often an honor-based collusion among victims and enablers not to expose the perpetrator to protect the community’s honor. That means we need to help the church create a new type of community that is radically different from the local context. We need a community that learns to risk trusting one another so that Biblical relationships can flourish.

What is your approach? 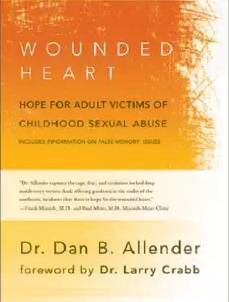 We looked for a methodology that could work through lay believers with some training and oversight, but not dependent on highly trained counselors or specialists. That led us to Open Hearts Ministries’ program which is based on Dan Allender’s work in The Wounded Heart, which focuses on healing adult victims of childhood sexual abuse from a Biblical perspective.

We have worked with Open Hearts to train people and then to get the copyright so we could translate the material to our language for use among the churches here. Open Heart’s group program “Journey” consists of 12 sessions, which invite participants into intense community to share their stories.

In the sessions people are taught to listen well, and to respond wisely and lovingly to others. They have proven to be effective in helping people work through all sorts of childhood wounds (which all of us have) and will go as deep as sexual abuse wounds. The national believers have responded very similarly to the Western and Asian expats and have added the comment, “all foreign workers here should go through a Journey because your discipleship doesn’t go deep enough – you don’t ask the hard questions.”