Here is an honor-shame paraphrase of Esther, chapter 1. This is excerpted from the new book Esther: An Honor-Shame Paraphrase, available as Kindle or PDF for $2.99. 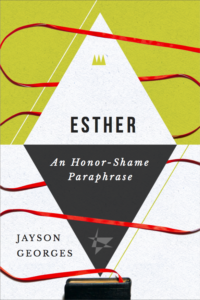 A long time ago, the king of Persia was a man named Ahasuerus. His glorious kingdom included 127 provinces from India to Ethiopia. (verses 1–2)

In the third year of his reign the king hosted a royal banquet for all his officials—the governors, ministers, and generals. The celebration was epic. For 180 days king Ahasuerus paraded his magnificence before everyone. His glory and honor were on full display. Everyone awed at the king’s splendor and majesty. (3–4)

After the six-month celebration for his officials, king Ahasuerus hosted another grand banquet for all the people in the capital of Susa. Everyone, from government officials to rural peasants, feasted in the king’s palace for seven full days. The spectacular event displayed all the king’s splendor: white curtains, blue wall hangings, purple linens, silver rings, marble pillars, and more. The people sat on gold couches, danced on pearl mosaics, and drank from golden goblets. At the king’s order people ate mounds of fancy food and drank barrels of exotic wine. The opulence reflected the king’s glory. He generously treated everyone like royalty, and they praised his benevolence. At the same time, Queen Vashti hosted another royal banquet for all the women of Susa. There was no end to the king’s extravagant generosity towards all his subjects. He sat proudly atop the hierarchy of honor. (5–9)

By the seventh day of feasting, the king was reveling in his glory. So he summoned Queen Vashti into his presence to display her royal beauty for all the people to admire. This made Queen Vashti feel degraded like a concubine, so she disobeyed the king and refused to come. Her public defiance insulted and infuriated the king. He completely lost face before all of his guests. (10–12)

The king gathered seven loyal advisers from his inner council, asking, “The queen has publicly defied my order. According to the laws of Persia, what is the consequence of not honoring the king?” (13–15)

One advisor said to the king, “The queen’s blatant disrespect not only wronged you, the king, but it wronged all Persian leaders. All the women will hear about Vasthi’s refusal to honor you and so likewise dishonor their own husbands. Her contempt threatens the entire social order of Persia. All the wives will despise their husbands, who are your officials. There will be no end to the disrespect and chaos in your kingdom. This will diminish your royal authority and undermine the social order. As the king wishes, you may issue a decree to expel Vashti forever from your presence. Then you can give her royal position to a virtuous woman who will respect you. When such a decree is announced throughout your kingdom, all the women will know their place and honor their husbands.” (16–20)

The king liked this proposal to reassert his authority and preserve the honor of his officials. He issued royal letters to all the provinces declaring that every man be honored as the head of his household. This would ensure the stature of King Ahasuerus and his administration. (21–22)