This paraphrase of James 1 is from the new book James: An Honor-Shame Paraphrase, by Dr. Daniel K. Eng.

From James, a slave in the service of Jesus, the exalted King. To the twelve tribes of God’s cherished people, far away from home, who live as outsiders in a foreign land, may you rejoice in God’s favor.1

Difficulties Refine Your Devotion to God

My dear family members, celebrate greatly whenever you go through all kinds of difficult times. You all know this process proves your loyalty to God, just like the process of testing gold proves that it is genuine. A furnace both tests the authenticity of gold and refines the purity of gold. Likewise, these difficulties make your devotion to God stronger. And let your collective devotion to God continue to grow and mature, so that you will be a fully developed family. Your loyalty will bring you toward the goal of being perfectly acceptable to God, not falling short in any way.2–4

But if any of you family members fall short in wisdom, ask our benevolent God! He generously gives to everyone no matter what their status. He is never reluctant; he doesn’t look for fault when giving to anyone. If anyone asks the Benefactor for wisdom, he will be glad to give it as a gift. But that family member must ask in loyalty to God alone, without wavering back and forth. Because someone who wavers and holds back from full allegiance to God is like an unpredictable wave, being tossed by the wind. That person has shown himself to be disloyal, and should not expect that the Benefactor will give him a gift. He has divided loyalties; he is a double-crosser. He cannot decide with whom his allegiance lies. He is two-faced and has no fidelity in anything he does.5–8

The Reversal of the Disgraced and Admired

The debased and marginalized brother or sister should publicly celebrate the high esteem that he will receive in the future. The rich man, now honored by society, should celebrate the disgrace he expects to get. Like a spring flower, those rich people receive admiration, but it will not last. The sun blazes and comes up with a burning wind, making the land like an oven. It reduces the grass to a wasteland, and the flowers shrivel up and die. The beautiful appearance that everyone celebrated is lost forever. In the same way, the rich man will lose the admired status he has while doing all his business.9–11

God esteems the person who remains loyal through all the difficulties. Just like we can tell that gold is pure when it remains the same in the fire, God esteems and approves the person who remains loyal to him through the tough times. That loyal brother or sister can look forward to receiving something even more valuable than gold: the crown of life, the eternal badge of recognition, which God promised to bestow on those devoted to him.12

God Does Not Entice Anyone to Disloyalty

My cherished and precious family, do not give in and follow the voices that lead you to wander away and be disloyal to our God, the benevolent One. Remember, every precious act of benevolence and every praiseworthy gift comes from above. God gives only good gifts, never evil. The good gifts come down like rain from our loving Father, the exalted One who made the sun and the moon and the stars. God is always the same. He is solid like a rock and never changes; he is not inconsistent like shadows. God decreed to birth us into his family through his true and reliable declaration, so that we would be the most precious of everything he created. God views us the way a proud father views his treasured children.16–18

Do Not Be Filthy

Always remind yourselves of this, my cherished family members—all of you should be eager to listen, be careful in choosing your words, and be patient before becoming angry with one another. Contain your desire to talk back or get even, because fleshly anger does not cultivate a life rightly devoted to God. Do not fool yourself into thinking your anger will end up honoring God. Because of this, remove the disgraceful things that make you defiled and unacceptable, as if you were stripping off your filthy outfit to prepare for baptism. Put them all aside: anger, hate, and malice. Instead, be immersed in humility. Embrace the precious gift that God has given us, the decrees he has embedded deep within you. This word has the might and potency to completely transform you.19–21

Be Executors of God’s Decrees

Live out the identity of being God’s family. Don’t just pretend that you like the word of God—do what it says! Be the administrator and executor of God’s righteous decrees. Do not hear it and then do nothing. That amounts to lying to yourselves about your allegiance to God. If someone receives the king’s decrees but fails to implement them, he is like a man who carefully examines his face in a mirror for a long time, then as soon as he walks away forgets what he looks like. All the time in front of the mirror amounted to nothing. But the person who takes care to examine God’s full and perfect declaration and stays loyal to it— he’s not just hearing or reading it. He is an esteemed executor of the King’s edicts. He is a trusted lieutenant or steward, acting on God’s behalf. He will be favored and distinguished. 22–25

Preview of the Rest of James: True Devotion to God

If you think that you are devoted to God, but your words are not under control, you’re fooling yourself. Your so-called devotion to God is worthless in his eyes. True devotion that is valuable before God is like unalloyed gold and silver. Like a spotless sacrifice, let your deeds before God be spotless. This unsullied devotion means caring for those marginalized and disregarded in society, including women without husbands or children without parents. True devotion to God our Father also banishes the undignified and disgraceful things of the world, keeping them from polluting you.26–27 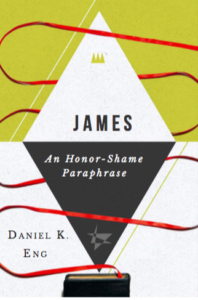 Click here for more information on the book James: An Honor-Shame Paraphrase.