Guest Julyan Lidstone has served with OM in the Middle East. This post is from his book Give Up the Purple: A Call for Servant Leadership in Hierarchical Cultures (Langham Global Library, 2019). 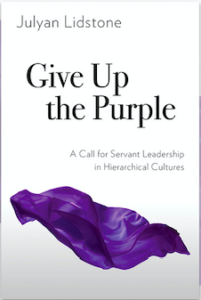 So often we see gifted, zealous leaders able to gather groups of new believers, but after an initial burst of enthusiasm the group stagnates and then suffers an acrimonious split.  The fundamental problem is that the leader understands his position to be a source of personal honour, and so he seeks to defend his status with controlling, domineering behaviour.  He (and it usually is ‘he’) takes offense at personal criticism, is afraid to admit weakness, and feels threatened by promising younger leaders.  Since the pursuit of honour is a zero-sum game, other churches are seen as rivals.  He is operating out of the patron-client paradigm, in which he as patron is responsible to care and provide for his flock like a father, and in turn his clients owe him a debt of loyalty, praise and service.  Although patron-client relationships can be life-giving and upbuilding, it seems they are often marred by exploitation and manipulation.  The toxic result is fatal for church life and growth.

Having served as a church planter among Middle Easterners for most of my life this pattern deeply concerned me, and became the focus of my Masters studies as I wanted to find an answer rooted in Scripture, not in Western social sciences and leadership theory.  I knew telling leaders from the Global South to become democratic, consultative Westerners would set them up for failure.  I believed that Biblical principles would be more widely applicable, speaking to both the West and the East, as both struggle with the problems caused by dysfunctional leaders.

The key insight came when I realised that although Jesus and Paul were functioning in highly authoritarian, honour driven societies, they both succeeded in modelling effective servant leadership.  Throughout Jesus’ ministry he consistently upended the normal understanding of honour, culminating in his willingly accepting death on a cross.  Crucifixion was the punishment for slaves, with the mocking and humiliation being an essential part of the spectacle.  Three days later he was vindicated by his glorious resurrection.

Paul showed what it meant to live out this principle of cruciform ministry with disgrace leading to honour.  When the ‘super apostles’ hijacked the church in Corinth he could have confronted them by matching their proud boasts with equivalent boasts of his own, but instead chose to boast of his weakness and shameful sufferings (2 Cor 11:21 – 12:10). By doing this he didn’t lose his spiritual authority, but instead God honoured him and two chapters later warns the Corinthians that he was coming with God-given authority to build up or tear down (2 Cor 13:10).  If he had tried to outboast the boasters, then the culture of boasting and pride would have stood intact; by embracing the cross of weakness and shame he was able to transform the culture with Kingdom values.

Since our understanding of authority and honour is shaped by our earliest family experiences, it is so deep-seated that a few lessons will not suffice to change it.  Even though the disciples had lived with Christ for 3 years, they were still arguing about who was the greatest the night before he died!  Nevertheless, Jesus and Paul show us how highly relational mentoring could transform them into genuine servant leaders.  They demonstrate how a godly patron can profoundly shape and influence his clients to embrace his mission.

A Pakistani Christian leader wrote in his review, “The leadership in the church in Pakistan has been badly affected by the authoritarian style. Sadly, hardly any literature is available that can break the long-lived endemic trend of this authoritarian leadership style.”