The Ladder of Ascent

The Ladder of Ascent is a spiritual treatise about monastic asceticism. An Egyptian monk named John Climacus (“the Ladder”) wrote this book around 600AD as a spiritual guide for other monks. The book presents 30 “steps” toward spiritual maturity, and focuses on the monastic virtues of humility, renunciation, and purity. More than 500 ancient manuscripts The Ladder exist today, an testament to its popularity on medieval Christianity. 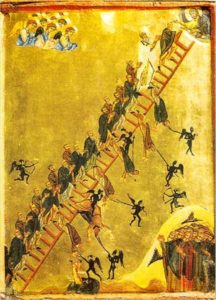 The language of honor and shame runs throughout the 129-page book, available in English here. I will make a few observations here.

The goals of the monastic life and ascetic practices were renunciation from the world and communion with God. Renunciation of the world involved foregoing physical pleasures (food, sleep, sex, etc.). However, for St. John, the real snare of the world was social status and honor. Pursuing God meant renouncing any sense of honor or recognition, at all costs. In fact, he admonishes Christians to seek dishonor, derision, insults, and slander as opportunities to learn humility.

Let us pay close attention to ourselves so that we are not deceived into thinking that we are following the straight and narrow way when in actual fact we are keeping to the wide and broad way. The following will show you what the narrow way means: mortification of the stomach, all-night standing, water in moderation, short rations of bread, the purifying draught of dishonor, sneers, derision, insults, the cutting out of one’s own will, patience in annoyances, unmurmuring endurance of scorn, disregard of insults, and the habit, when wronged, of bearing it sturdily; when slandered, of not being indignant; when humiliated, not to be angry; when condemned, to be humble. Blessed are they who follow the way we have just described, for theirs is the Kingdom of Heaven. (2:8)

While the pursuit of humility is right and encouraging, the author John repeatedly conflates humility with humiliation. The author states that a good abbot should publicly and constantly humiliate monks under his leadership to teach them humility. For example, the author recounts the story of a respected abbot who assigned a new monk to grovel and petition (as a “crazy fool”) at the monastic gate for seven years. This taught the new monk to live without any form of recognition or respect from other humans, thus purifying his soul to hear only the voice of God. This is John 5:44 and 12:43 to the extreme!

In relation to honor and shame, the most extended section is Step 22, titled, “On the many forms of vainglory.” The monk, with great insight, unpacks the corrupting influence of vainglory in our behavior. We humans are addicted to flattery and praise.  I was struck how the insights of this person–a monk living in the desert 1,500 years ago—may speak to people today. The passage is cited at length below.

This is the twenty-second step. He who is not caught by vain-glory will never fall into that mad pride which is so hateful to God.

4 comments on “The Ladder of Ascent”