The Meaning of God’s Grace

Dr. John Barclay is Lightfoot Professor of Divinity at Durham University. His latest book Paul & The Gift (Eerdmans, 2015) is being hailed as “pioneering” and “ground-breaking.” At the recent Society of Biblical Literature, several people called it “the most important book on Pauline theology in 30 years.” In this post about honor, shame, & grace in Galatians, he incorporates material from chapter 14. 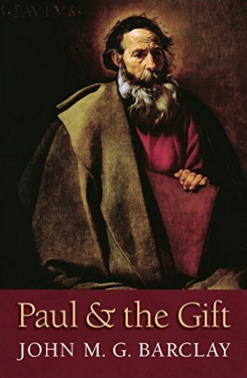 Paul’s theology of grace was a radical intervention into a culture of honour-acquisition and status-competition. Paul’s gospel announces that God’s definitive gift in Christ does not, as one might expect, follow pre-constituted standards of worth, but is given without regard to worth and grants the only worth that truly counts. Paul’s contemporaries, both Jewish and non-Jewish, were inclined to take for granted that God’s benevolence, though lavish, was given discriminately, as all good gifts were given to those considered worthy of them by one criterion or another (ethnicity, social status, gender, education, morality, or age). It was common to imagine that God’s generosity (and the generosity of the righteous) would be limited to those who were qualified, in one way or another, for his gifts. But Paul announces the divine gift given without regard to worth (his definition of grace), and he thus creates the possibility of new configurations of society and new understandings of value. Baptism constitutes the complete re-foundation of the self and of community: ‘in Christ, there is neither Jew nor Greek, slave nor free, male and female’ (Galatians 3.28). The God who acts in Christ without regard to the human ‘face’ (Galatians 2.6) creates the worth of those he saves, and enables them to recognise one another as welcomed and honoured by God, without regard to their former systems of symbolic capital. God’s honour, given in Christ, is the only honour that counts, but it counts for everything. This not only founds a new community, but it establishes a new kind of community. The Roman culture that Paul and his churches inhabited was constituted by the competitive quest for honour, which both ordered society and threatened its well-being: ambition turned easily to arrogance, comparison to insult, and rivalry to aggression. At the end of Galatians, and as the climax of its theology, Paul sets out the parameters of the new community in Christ (Galatians 5.13 – 6.10), which are freed from the competitive instincts of ‘the flesh’ (Galatians 5.19-21) and learn to practise the fruit of the Spirit (Galatians 5.22-23). This establishes a new system of worth, and thus honours those who are ‘spiritual’ (Galatians 6.1) and who teach the new word (Galatians 6.6). But the hallmark of this alternative system of value is that it is specifically directed against rivalry: the greatest honour is for those who work against the competitive spirit of honour itself (Galatians 6.1-5). Thus Paul’s redefinition of honour gives prestige to traits that promote social cohesion and mutual construction. And this is not a social ‘ethic’ tacked on to his ‘theology’: it is the necessary outworking of his theology of grace. If justification by grace means God’s creation of worth solely through the Christ-event, the continuation of old ethnic or social distinctions (e.g., in meal practices at Antioch, Galatians 2.11-14), and the pursuit of honour measured by human criteria of worth, are a direct denial of the good news. As an assembly founded on the gift to the unworthy, the church is enabled and required to model new systems of value and to offer to all the dignity that really counts – that of being children and therefore heirs of God in Christ. For more, read Dr. Barclay’s recent interview with Christianity Today. To learn more about honor and shame in the Bible, theology, and ministry, see these recommended resources.

2 Comments on “The Meaning of God’s Grace”