Honor and Shame in Lamentations 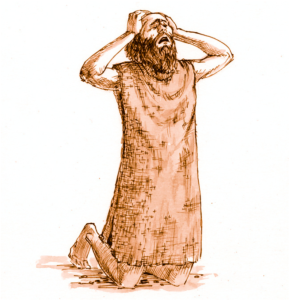 The book of Lamentations features two of my least favorite things in the world—poetry and suffering. I enjoy many other biblical books more than Lamentations. But in seasons of loss and anguish, the voice of Lamentations has drawn my attention like a bright, unavoidable light.

The book of Lamentation consists of five alphabet poems, funeral dirges. The city of Jerusalem was destroyed, and the people of God were decimated in 586 BC. To grieve this tragedy, Lamentations articulates the social devastation and explores theological tensions. And naturally, honor and shame are prominent themes in Lamentations.

This post lists verses explicitly discussing the dishonor and shame of Israel’s devastation. Then I explain the broader theological mindset surrounding these verses.

All who honored her despise her, for they have seen her nakedness. (1:8)

How the Lord in his anger
has humiliated daughter Zion! (2:1)

He has brought her kingdom and its princes
down to the ground in dishonor. (2:2)

I became the laughingstock of all my people;
they mock me in song all day long. (3:14)

Let him offer his cheek to one who would strike him,
and let him be filled with disgrace. (3:30)

You have made us scum and refuse
among the nations. (3:45)

Remember, Lord, what has happened to us;
look, and see our disgrace. (5:1)

Along with these explicit verses about honor and shame, Lamentations communicates honor-shame realities non-discursively through motifs such as defilement, subjugation, loneliness, and hopelessness (addressed in the next post).

The poems of Lamentations grieve the loss of Israel’s honor. The political subjugation and miserable conditions symbolize the nation’s lost status. The physical and economic destruction of Babylon’s invasion has caused social disgrace. In losing their ancestral home, Israel had lost their status and significance. The poems of Lamentations bemoan their shame and plea for restored honor. The core issue is not material loss, but social loss. Israel’s main problem was not poverty, hunger, or exile, but the disgrace associated with those conditions. After Babylon’s invasion, Israel could repeat Job’s lament:

He has stripped me of my honor
and removed the crown from my head.

He tears me down on every side till I am gone;
he uproots my hope like a tree.
His anger burns against me;
he counts me among his enemies. (Job 19:9-11)

The devastation of Israel created a theological problem—the dishonor of God. How can God be a righteous covenant partner if he destroys his people? Israel’s suffering and shame (seemingly) discredited God’s honor as a patron and provider. If God’s people experience shame, how can God be an honorable king? (cf. 5:19-22). For more, see this post about Old Testament theodicy.

This theological conundrum pushes the poet to explore the cause of Israel’s shame. The nation’s sin and rebellion is the primary cause of the destruction. Israel’s shame is discipline for their sin (Lam 1:5, 8–9, 14, 18, 20; 2:14; 3:39–42). By accepting responsibility for the evil, Israel absolves God of the blame and helps to restore his honor. The fault is not his shameful lack of loyalty or strength, but their disloyalty as his covenant clients.

God also plays an active role in Israel’s experience. God “humiliates” and throws down” Israel, but his actions are justified because of Israel’s sin. In fact, the destruction is proof of God’s covenant loyalty (albeit to the promises of cursing in Duet 28). God’s past judgments are the basis of Israel’s hope for future restoration. If God was consistent to judge, he will also be consistent to save (Lam 3:20-22). As Israel experiences shame, she interprets the shame in a way that preserves God’s honor, and also invokes God to restore her honor.