A Hermeneutics of Honor: John Chrysostom

John Chrysostom, the archbishop of Constantinople (353–407), was famous for his eloquent preaching (the moniker Chrysostomos means “golden-mouthed”). His eighty-eight exegetical homilies on the Gospel of John read much like a social-science commentary. I will explain a few ways that honor and shame shaped his interpretation of Scripture.[1] This post three areas where honor and shame influence Chrysostom’s exegesis.[2] 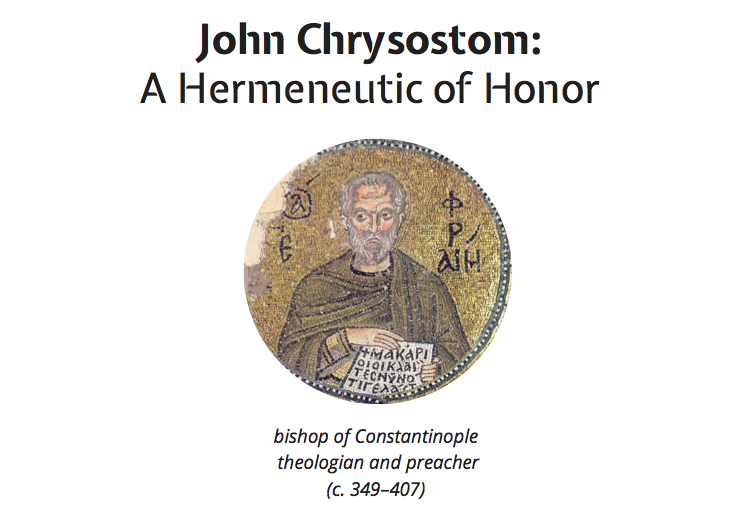 Chrysostom references honor-shame dynamics to expound the theology of the incarnation in John 1:1–14. Chrysostom says that John opens with the pre-existence of God’s Word because “he knows that men most honor the eldest of beings which was before all” (2:7).

Chrysostom was adamant that the language of “son” does not imply inferiority to the Father. John used this expression son because he was “very confident that between Father and Son there was an equality of honor” (5:2).

Chrysostom describes the incarnation (“the Word became flesh,” John 1:14) as a king conferring honor upon the lowly. “For the high when it associates with the low touches not at all its own honor, while it raises up the other from its excessive lowness; and even thus it was with the Lord. He in nothing diminished His own Nature by this condescension, but raised us, who had always sat in disgrace and darkness, to glory unspeakable. Thus it may be, a king, conversing with interest and kindness with a poor mean man, does not at all shame himself, yet makes the other observed by all and illustrious.” (11:1).

Chrysostom uses the metaphor of wedding (cf. Mt 22 and 25) to explain John 1:13 (“Who were born, not of blood, not of the will of the flesh, but of God.”) The wedding invitation is “so great an honor,” but we behaved with insolence (10:3). God “honored us with all other honor; but we…have offered insult to him” (10:3). Because we acted unworthy and defiled our garments as invitees, “it is to honor the marriage and guests, that [God] drives off those bold and shameless persons” (10:3).

Chrysostom read John as stories about people honoring or shaming Jesus. He says the opponents “use every artifice to destroy the honor of the Son of God… seeking eagerly to pull down Him whom they say they worship.” But their opposition to Christ will “fill their faces with shame and their souls with punishment” (3:2). In contrast, the apostle John was “not ashamed of the dishonor of his Teacher” (10:2).

Chrysostom interprets Jesus’ miracle at the wedding in Cana (John 2) in light of honor and shame. He notes how the wedding hosts failed to properly respect Jesus—they “invite[d] Him not as some great one, but merely as an ordinary acquaintance” (21:1). Nevertheless, the famous Jesus attended the wedding not looking “to His own honor, but to our benefit” (21:1).

Chrysostom says that Jesus’ comment to his mother—“Woman, what have I to do with you?”—was not disrespectful or insulting, but was to “procure her the greatest benefit”(21:2). “Though [Jesus] was careful to honor His mother, yet He cared much more for the salvation of her soul,” which comes through giving honor to Jesus. Had Mary expected to “always be honored by Him as by a son,” then Jesus could not change his mother’s thoughts from “his present lowliness to his future exaltation.”

And why did Jesus say, “My hour has not yet come,” but then perform the miracle? Chrysostom proposes, “He did it to honor His mother, that He might not seem entirely to contradict and shame her that bare Him in the presence of so many” (22:1). After the wedding, Jesus escorts his family home to Capernaum where he spent a few days “to honor his mother” (23:1). Contemporary exegetes might contest Chrysostom’s cultural insights, but he would likely agree with our attempts to read Scripture in light of honor and shame.

3. Honor as a Hermenuetical Telos

Chrysostom’s homilies exhort listeners to appropriate God’s honor. The God who assigns honor is more honorable than mortals. For Chrysostom, the text of John (especially in Johannine passages where people reject Jesus) should refashion our “honor code.” These quotes illustrate Chrysostom’s reflection on the nature of honor.

“Beloved, let us…be sensible of the nobility which has been given to us by God; let us despise vulgar applause. For nothing is so ridiculous and disgraceful as [vainglory], nothing so full of shame and dishonor. One may in many ways see, that to love honor is dishonor; and that true honor consists in neglecting honor, in making no account of it, but in saying and doing everything according to what seems good to God.” (3:6)

“For if we should even desire to attain this honor, we shall then attain to it, when we seek that which comes from God alone. For, He says, “Them that honor Me, I will honor” (1 Sam 2:30). … If then we desire to obtain honor, let us shun honor, so shall we be enabled after accomplishing the laws of God to obtain both the good things which are here, and those which are promised.” (3:6)

“Look up straight to God: He will praise you, and the man who is approved by Him must not seek honor from mortals. Mortal honor often arises from flattery or hatred of others, and brings no profit; but the decision of God is free from this inequality, and brings great advantage to the man whom He approves. This praise then let us follow after.” (4:4)

“If an earthly king approves you, you make no account of the many, though they all deride you; but if the Lord of the universe praise you, do you seek the good words of beetles and gnats? For this is what these men are, compared with God, or rather not even this, but something viler, if there be anything such. How long do we wallow in the mire? How long do we set sluggards and belly-gods for our judges? (76:3)

Overall, Chrysostom’s homilies on John provide a historical model for hermeneutics and homiletics from an honor-shame perspective.

One comment on “A Hermeneutics of Honor: John Chrysostom”